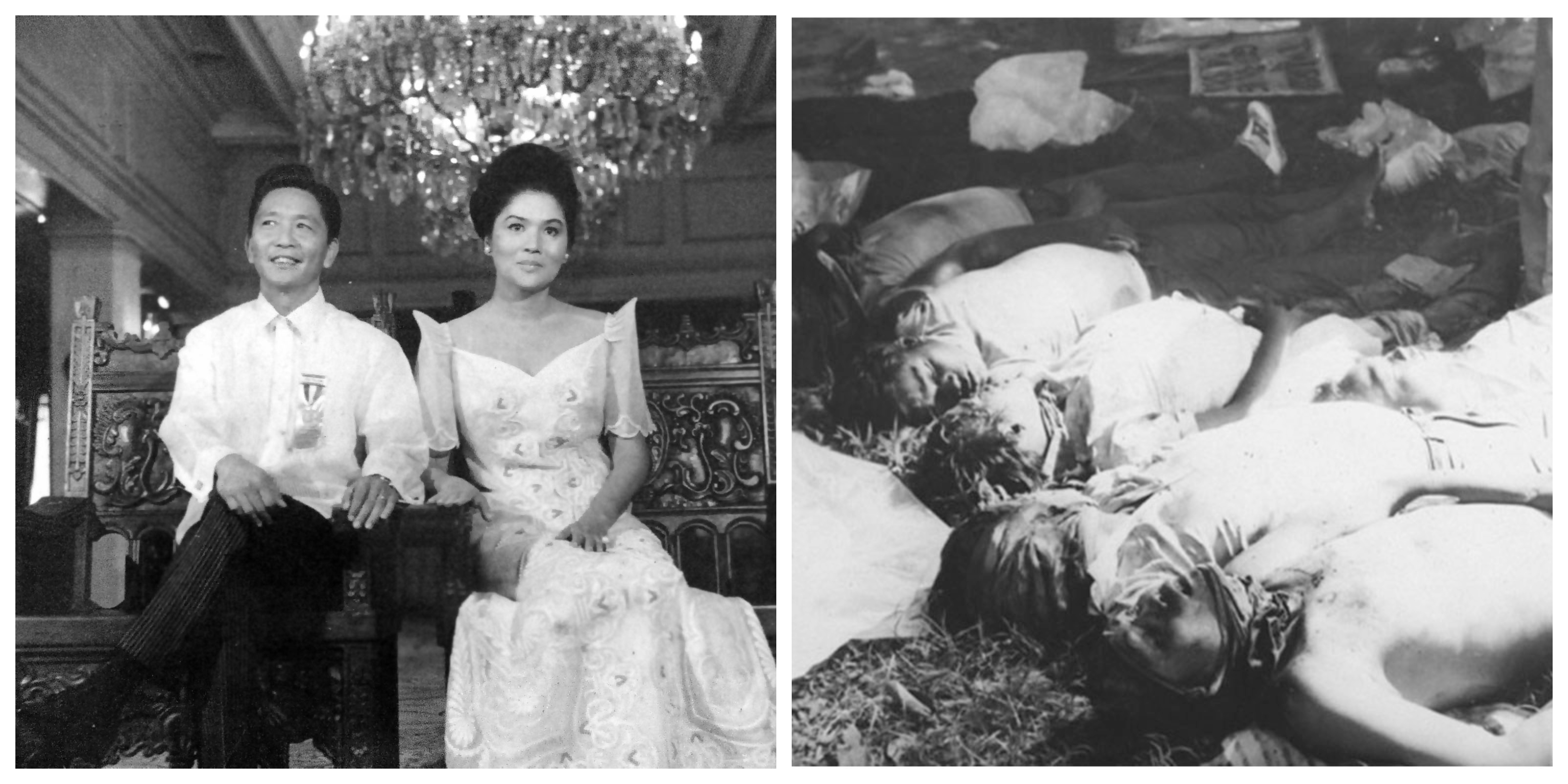 On the 21st of September 1972, Filipinos remember the declaration of martial law by then President Ferdinand Marcos. It is an occasion to remind ourselves of the brutality of the dictator’s regime, and to commemorate the sacrifices of the human rights activists who fought valiantly to restore the rule of law.

Unfortunately, the incumbent government of President Rodrigo Duterte has effectively sanitized the legacy of the Marcoses. There is a large, and growing, sector of the Filipino public who not only deny the corruption and violence that was perpetrated by the state during martial law, but would even argue that President Marcos was a benevolent ruler who was wrongfully ousted by corrupt entities himself.

This specious line of thinking has been made possible by historical revisionism made accessible to everyday Filipinos mostly through social media, but also through blogs and websites. The digital age may have made the transfer of knowledge much simpler, it has also facilitated the swift dissemination of false or misleading information.

We can see the evidence of the Marcos family’s return to a level of influence today: the dictator’s namesake and only son, Ferdinand “Bongbong” Marcos Jr, nearly won the race for vice-president during the 2016 general elections. Imee Marcos, a daughter of Marcos Sr, won a seat as Senator during the 2019 midterm elections and received the eighth highest number of votes.

Perhaps the most evident proof that Marcos Sr’s reputation has been repaired was when President Duterte had his remains transferred to the “Libingan ng mga Bayani” (Heroes’ Cemetery), which is a site reserved for fallen soldiers and deceased honourable public officials. By virtue of Marcos’ burial in this cemetery, he had been given de facto status as a hero.

To counter this blatant historical revisionism, those who lived through the martial law period, and scholars who have studied in depth the facts of the Marcos regime, are obliged to remind the world – particularly the Filipino people – the horrors that happened under those dark times.

A good place to start would be to hear from the human rights activists who suffered under the Marcos era firsthand, and several narrate their stories in this video by CARMMA (Campaign Against the Return of the Marcoses and Martial Law):

The Martial Law survivors in that video recount the torture they experienced under the Marcos Regime, and violence was definitely a recurring theme during those days. In fact, a shrine to memorialize all those who did not live to tell their tale was erected as a reminder of all the brutality called the “Bantayog ng mga Bayani” (Monument of Heroes).

The Monument also tells the stories of those victims, like student activist Edgar Jopson who was arrested by Marcos’ soldiers and tortured, later summarily executed, for organizing labour union strikes challenging the worsening state of workers’ rights under the regime. Or the story of five individuals collective called, “The Bulacan Martyrs”, namely, Danilo Aguirre, Edwin Borlongan, Teresita LLorente, Renato Manimbo, and Constantino Medina, who were organizing a protest when military forces suddenly arrested them one day in 1982 and all five of themwere found dead the following day.

The period was also notorious for its massacres, an example of which was the Escalante Massacre in the province of Negros Occidental. Sugar plantation workers, backed by other activists, conducted a noise protest in Escalante City, calling on the government for fair wages and land distribution; instead of meeting their grievances, the protesters were met with tear gas and bullets by responding units of the Regional Special Action Force (RSAF) and the Civilian Home Defense Forces (CHDF).

The aftermath found 20 activists dead, with thirty more wounded. Nearby buildings and structures were riddled with bullet holes, and bodies had to be recovered from the protest site and from sugarcane fields surrounding the location. This event is also sometimes remembered as, “Bloody Thursday” and is among the most brutal episodes of the Marcos period.

There were Marcos-era dissidents who were lucky enough to live to see the fall of the dictatorship in 1986. Many of whom were either tortured or became political prisoners during the Martial Law era, becoming activists who continue to remind us of the atrocities of those dark days.

One of them is Prof. Judy Taguiwalo, a University of the Philippines women’s studies professor who was a staunch activist during the Marcos period. She was already pregnant when she was arrested by state forces in 1984, and eventually gave birth to her daughter in prison.

Her only “crime” for being arrested was that she was one of the founders, and avid activist, of the women’s rights organization Malayang Kilusan ng Bagong Kababihan (Free Movement of New Women; MAKIBAKA). As was the case during the Marcos dictatorship, anyone who dared oppose the regime would – at the very least – find themselves behind bars. Those less fortunate, would either end up missing or summarily executed.

Dr. Taguiwalo’s fellow activist at that time, Liliosa Hilao, was one of those less fortunate ones. Although not active in demonstrations, “Lily” was an avid writer and poet who authored essays critical of the Marcos regime.

One fateful night, drunken soldiers broke into the Hilao family residence and demanded the household surrender Lily’s brother, who was an activist. Instead, she refused to give any information to the soldiers without them showing an arrest warrant first.

For demanding that they follow the rule of law, Lily instead was beaten up and arrested by those soldiers. She would be tortured, as was testified by her brother-in-law who was an army officer himself, and when Lily’s sister visited her the next day she would already be dead.

Of course, talking about the horrors that happened during the Marcos regime would not be complete without mentioning the plight of indigenous Filipino tribes. The most famous example was the story of Macli-ing Dulag of the Butbut tribe from Kalinga province, who led his tribe to resist the construction of the Chico River dam in their ancestral land during the late 1970’s.

The dam project would have affected 100,000 people, most of whom were from the tribe as Dulag, and would also have environmental impacts on their tribal land. As the tribal chieftain, he led his tribe to conduct demonstrations that would hinder the construction of the dam, eventually forcing the Marcos administration to pull-out National Power Corporation (NAPOCOR) survey teams from the site of the dam temporarily, in 1975.

Dulag had proved to be a formidable barrier blocking Marcos’ ambitious project, thus on April 24, 1980 members of the President’s armed forces approached the tribal chieftain’s house and opened fired on it – killing him instantly. Outrage ensued because of the blatant violation of human rights that occurred, forcing the World Bank – which partly funded the project – to shelf the dam entirely.

The atrocities under the Marcos dictatorship were so brutal, and done so blatant, that it is astonishing how many Filipinos have come to the conclusion today that the dictator was benevolent. How they could even think that he was not only innocent of all the crimes accused, it was Marcos himself who was the victim.

In these times, that famous quote by George Santayana resonates loudly: “those who do not learn from history are doomed to repeat it”. If many Filipinos are choosing to forget the suffering that our country endured under the Marcos rule, it is not surprisingly that a majority of them tolerate the worsening crimes under the current Duterte regime.

They turn a blind eye to injustices happening around them, complacent that these brutal acts are not happening to them or anyone they know. Unbeknownst to them, President Marcos was popular too at first, before he used his popularity to bring about an era of impunity and tyranny.

Padme Amidala, a fictional character in the Star Wars film series, is known for this line applicable to the present-day situation in the Philippines: “This is how liberty dies, with thunderous applause”. It is painful to think that Filipinos are constantly reminded of the horrors of fascism and dictatorship every September 21st, but instead they choose to forget the lessons of the Marcos era and continue to usher in another dark period in our country’s history.