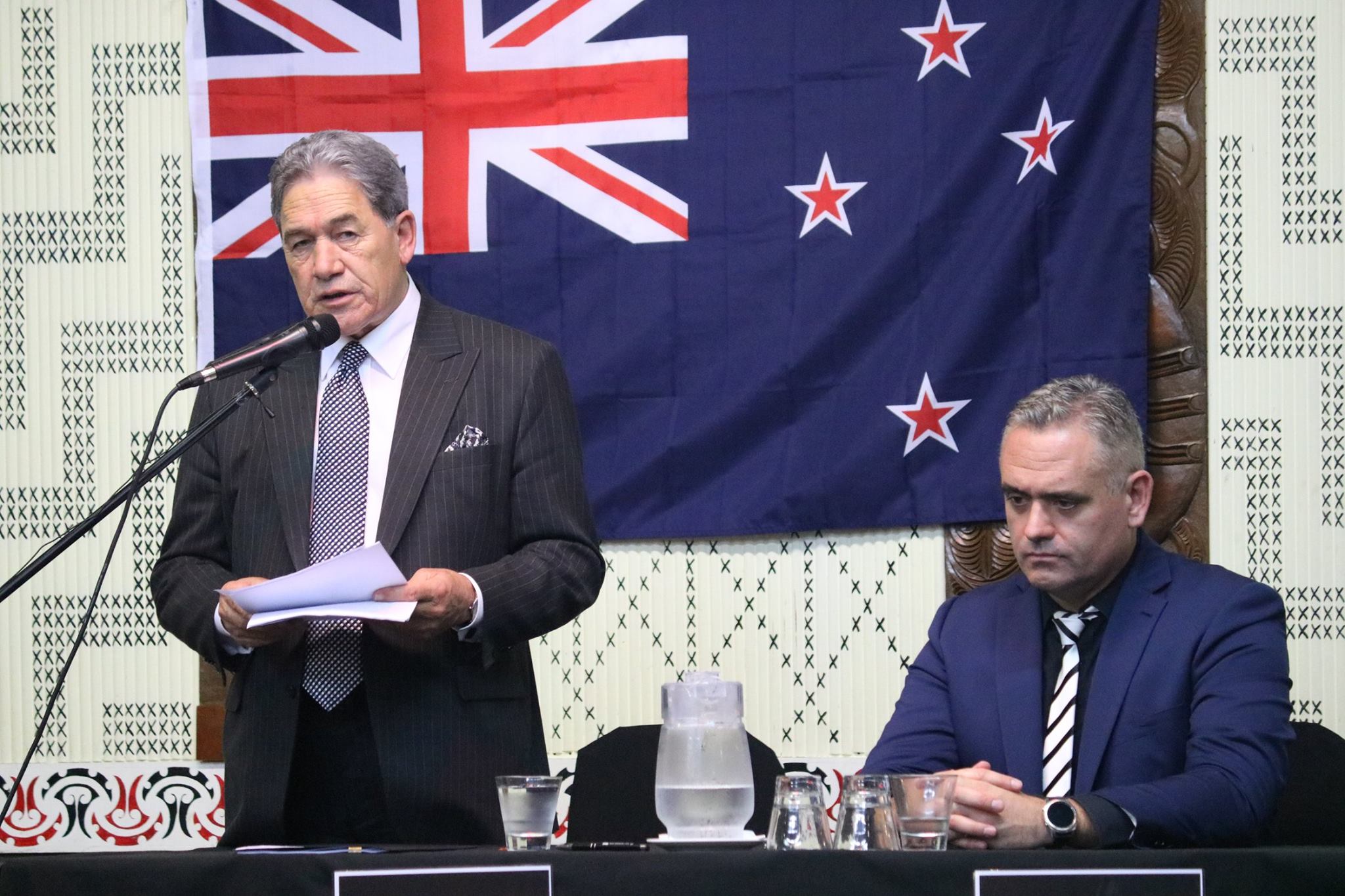 “It’s the people we set out to help that should be our greatest purpose. There’s a whole lot of people who’s very life and future depends on our success.

I hope we never forget that Fletcher, and I don’t think we will.”

A politician is only as good as their ability to keep the promises they made before being elected.

When the leader of New Zealand First, the Rt. Hon. Winston Peters announced his first public meeting since being heralded as the country’s Deputy Prime Minister – its second-in-command – he was expected to brief his supporters of what his party has achieved after being voted in by them in the September 2017 elections.

A lot has happened since then: the party entered a coalition agreement with the New Zealand Labour party, they then announced bans on further offshore gas exploration in the Taranaki – where the oil industry was their lifeblood.

New Zealand First also failed to push through with its promise of a binding referendum on the Māori electorate seats, and faced severe criticism for reluctantly agreeing to the CPTPP agreement.

Most notably, the party now had a new deputy leader – Fletcher Tabuteau MP – replacing the Hon. Ron Mark, who became Minister of Defence and Veterans’ Affairs when the new government was announced. The public meeting was also the first time the party faithful would hear him speak as Winston’s new #2.

The location of the public meeting also bode him well, being in Rotorua where Fletcher was based as a list MP. It is also a regional city, which should win NZ First favors as it campaigned on boosting economic growth in provincial New Zealand during the election.

The crowd that I saw that afternoon upon entering the Copthorne Hotel on Fenton Street was a mix of grey-haired elderly, middle-aged adults and young politics enthusiasts and were all eagerly awaiting for the speech to commence.

Starting the event, Fletcher warmed the crowd by thanking the party for entrusting him with the Deputy Leadership role and also with important portfolios such as Undersecretary for Foreign Affairs and for Regional Economic Development.

With the added responsibilities, he joked that he “felt sorry” for not seeing his wife as much as he’d like. He then introduced his Party Leader, who was now the Deputy Prime Minister of the country.

And Peters himself kicked off his address with a joke of his own, preferring not to use the lectern for his speech as “It’s the kind of lectern some politicians use to hide from the public”.

Then he highlighted an important achievement NZ First accomplished in the six months they’ve been in government: the return of the Forestry Service which will have its headquarters in Rotorua. Peters talked about how important it was to have the new government agency stationed in the city given it was, “the forest capital of New Zealand.”

He then lamented how many jobs it will provide for the city, as well as the Bay of Plenty region as a whole. In vintage fashion, the NZ First leader talked history: bringing up how many jobs were lost when the original forestry service was abolished by the Lange government in 1987.

Peters also took note that many of those who became unemployed were of Māori descent.

Then he talked about the present, particularly with the challenges the incumbent government faces as a result of the negligence of the previous National-led government. Housing, taxation and infrastructure – particularly in the regions – were in bad shape and that the Labour-NZ First Coalition faced a gargantuan task to overcome it.

As Peters put it: “They [National Party] have after nine years suddenly discovered there’s a housing crises and homelessness.”

Despite the challenge, Peters made no excuses about it and claimed that his government was “working well” to resolve these issues.

Then lastly, the speech talked about the future. The biggest question on the country’s political mind at present was the impending hiatus to be taken by the Prime Minister Rt. Hon. Jacinda Ardern, as she undergoes maternity leave.

It was at this point when he delivered his second-most memorable quote of the day: “We’re going to make it normal for people not to think having a baby impairs their career paths.”

The Prime Minister faced countless misogynistic attacks, arguing that it was irresponsible of her to become pregnant while serving as the nation’s de-facto head-of-state. In her absence, the Deputy Prime Minister will take over the State’s day-to-day affairs.

On the transition, Peters said that the Coalition is “very confident things will go smoothly”. He also stated that he was doing the exact same job 22 years ago, during the government of National’s Jim Bolger.

Then finally, Peters topped off the occasion with his most memorable line of the event: “It’s the people we set out to help that should be our greatest purpose. There’s a whole lot of people who’s very life and future depends on our success. I hope we never forget that Fletcher, and I don’t think we will.”

That line put most people’s worries at ease. It essentially signified that the Party Leader’s, as well as that of his party’s, hearts were still in the right place – they still see the uplifting of the lives of New Zealanders suffering as their greatest mission.

The public meeting on the 12th of May in Rotorua was significant for a plethora of reasons: it was the first such party event since the 2017 elections, it was Peters’ first public address since becoming the Deputy Prime Minister and it was also Fletcher’s first party appearance after being elevated to its deputy leader.

But above all, it was an important occasion to see if the Party still had the same principles, the same ambitions it had before the election or if they had lost it while in government. Thankfully, the two men leading the Party put that latter concern to bed.