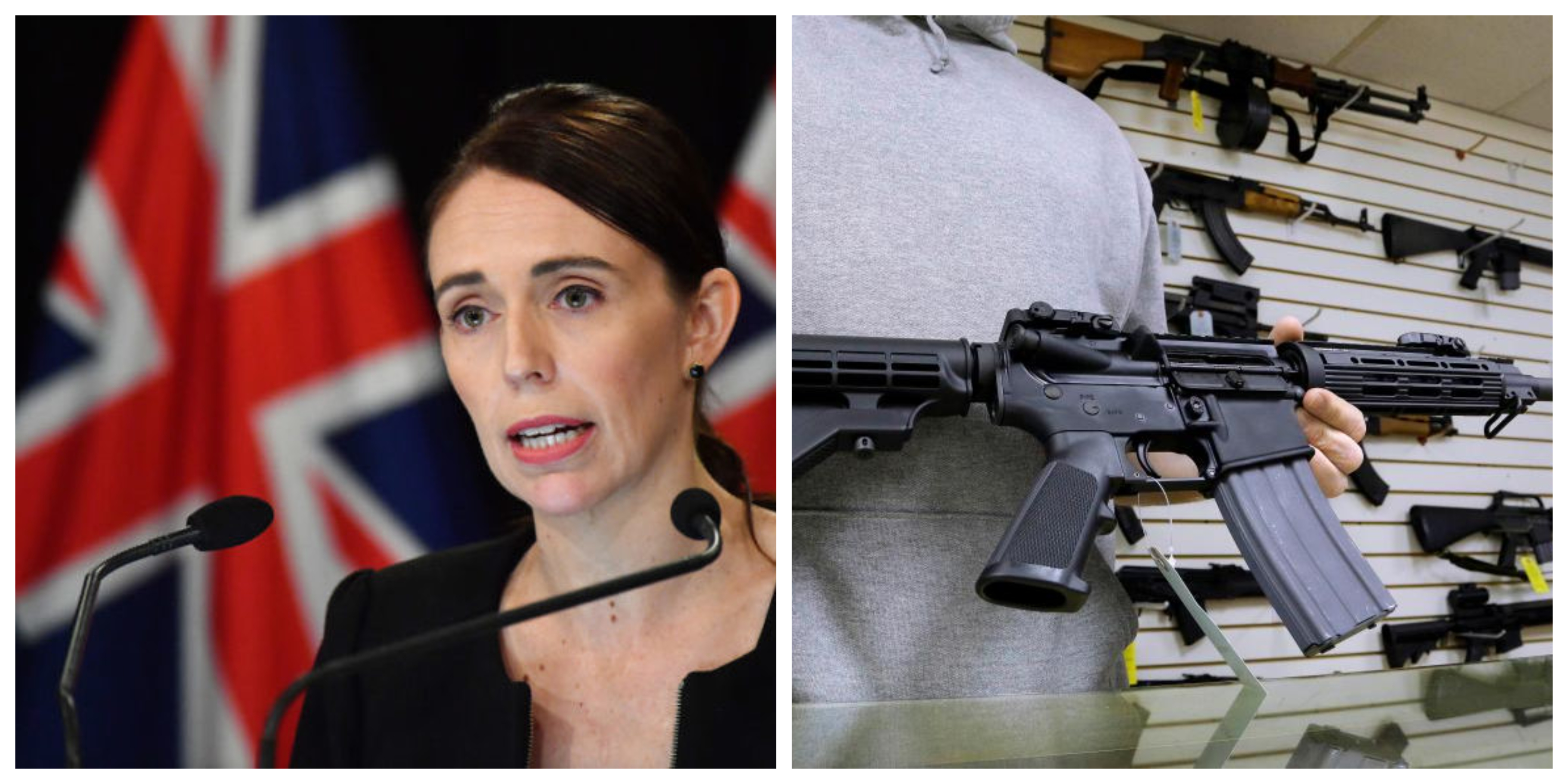 In the aftermath of the heinous Christchurch terrorist attacks, Prime Minister Jacinda Ardern swore that New Zealand’s “gun laws will change”. Her Attorney-General David Parker initially alluded to a ban on semi-automatic weapon ownership, with more fulsome details to be announced at a later date.

Less than a week after the attacks, Ardern has announced exactly what those changes to our firearms legislation will look like. Not only will the firearms utilized in the terrorist attacks be banned, but her Government will also implement a buy-back scheme which Australia adopted in the wake of their own mass shooting incident in 1996.

But what exactly are the types of firearms to be banned, and how are they described? How will the gun buyback scheme work? And what will these changes mean to responsible firearms owners who have never fallen afoul of the law?

Ownership of firearms and the administering of firearms licenses to private individuals is outlined in the Arms Act of 1983 (Read the full law here). Major amendments to this law were passed subsequent to the 1990 Aramoana Massacre in Dunedin, and the bill has remained largely intact in the nearly three decades since.

The Act is administered solely by the New Zealand Police, who issue gun licenses and endorsements to individuals who meet their criteria of having good legal standing and pass psychiatric and drug testing.

The process of obtaining a license also requires attendance to a firearms safety course, passing theoretical and practical examinations on firearms safety, securing a safe storage for your firearms, a face-to-face interview with an Arms Officer, and the endorsement by two chosen referees (one non-relative) of your character.

An overview of firearms licenses and endorsements

New Zealand Police administer the vetting and interviewing of firearms license applicants, as well as the provision of further endorsements.

To procure a license you have to be at least 16-years old and satisfy the requirements mentioned above. However, completing this only affords you with a “general” A-category firearms license which only entitles you to be in possession of firearms of “sporting configuration” – and does not include weapons considered “military-style semi-automatic”, “restricted” or “pistols”. (Definitions of each explained below)

Possession of such firearms requires further endorsements to your license from the Police.

A B-class endorsement allows a person to own pistols, but is only given to bona fide members of established pistol clubs. The said pistols can also only be fired at an approved pistol range, with more regulations imposed on its carriage away from the owner’s home.

A C-class endorsement allows a person to possess and use pistols and “restricted” weapons. Issued only to bona fide gun collectors, whom a particular weapon has a special significance (e.g. as an heirloom), to museum curators, and to theatre, film and TV production armourers. Weapons held under a “C” endorsement may not be fired with live ammunition, though blanks may be fired for film, TV and theatre purposes.

D-, and F-class endorsements are given to approved firearms dealers only.

An E-class endorsement allows a person to possess and use military-style assault weapons. Applicants must demonstrate to Police a genuine reason for needing these weapons, and those could include purposes of professional hunting, professional pest control, or participation in sporting events.

These endorsements are only possible after further Police vetting and payment of further fees. The applicant is also required to provide enhanced firearms storage areas for these weapons.

(READ: Firearms legislation New Zealand – an overview by the Council of Firearms Owners)

Key to understanding gun laws is to first understand what each of the technical terms mean.

According to the 1992 Arms Amendment Act, a semi-automatic weapon with a sporting configuration refers to one without any of the following features:

Firearms that fall under this description are the only ones available for A-license holders to possess and use. Semi-automatic weapons that are enhanced with any of these restrictions, such as those used in the Christchurch terrorist attacks, are classified as “military-style semi-automatic” (MSSA) weapons – and require an E-class endorsement from Police.

The 1992 Act describes MSSAs as: “A firearm which, after being loaded, fires, ejects, and
chambers a cartridge with each pull of the trigger; but does not include: a) a pistol, or b) A semiautomatic firearm that, with its magazine (if any), is maintained at all times in a sporting configuration.”

Difference between semi-automatic and fully-automatic weapons

A segment from a United States news report which explains how “bump stocks” can allow semi-automatic rifles (which most rifle-owners have) to mimic fully-automatic weapons.

Loopholes in the law, how the Christchurch attack happened

As the excerpt from the 1992 Amendment Act implies, a “general” A-license holder can legally acquire semi-automatic weapons (such as the ones used in the terrorist attacks) provided they are in that “sporting configuration”. Enhancing that into an MSSA requires an E-class endorsement, but can be easily done thanks to lax laws surrounding the import of parts for modification.

That is precisely what the Christchurch terrorist did. New Zealand Police revealed that the perpetrator did possess an A-category firearms license, and thus legally entitled to acquire semi-automatic firearms (with sporting configuration) in the country.

With that A-category license he procured the weapons he used, and further enhanced them – illegally – into MSSAs. The modification of those weapons into an MSSA is what enabled him to mount such a catastrophic attack on his victims, taking 50 lives in the process.

Police and gun enthusiasts have been critical of how the legislation is written in the past, which has allowed many A-license holders to be in possession of E-category weapons through modifications. Sadly, their concerns were never given much urgency by any of the previous governments.

Spot the difference? How a simple modification can allow access to MSSA weapons

What has the Government decided to do?

Essentially, Prime Minister Ardern announced changes that means all of the firearms used in the Christchurch terrorist attacks would now be banned.

Ardern said her Government wanted to target weapons that had “large-capacity magazines” and the capability “to shoot continuously”. She notes: “the time for mass and easy availability of these weapons must end”.

Naturally, these changes need to be passed in Parliament – but that seems to be a mere formality as the measure has support from the Coalition parties and even the opposition National Party. Ardern expects a consensus of support not only in Parliament, but among all law-abiding New Zealanders also.

The Prime Minister expects the law to be in place by the 11th of April, with the necessary order of legislation to be followed including a select committee process. This begs the question: what if people rush to purchase firearms right now, in anticipation of the ban?

Reclassification in the meantime

Ardern realises the susceptibility of stockpiling in the aftermath of this announcement, to prevent that she has issued an Ordering Council to reclassify all aforementioned firearms into an E-class endorsement only – with immediate effect.

This means that the sporting configuration assault weapons mentioned previously will also now be an E-category weapon. The move essentially blocks loopholes to possess an E-class weapon having only a standard A-category license, through modifications.

While individuals can still apply for E-class endorsements, Ardern emphasized that doing so “would be a waste of time”. While she did not explicitly state it, we can take this to mean that Police will de facto not be entertaining applications for an E-class endorsement.

Following Australia’s example when they implemented a crackdown on assault weapons in the aftermath of the Port Arthur Massacre, Ardern also announced that there will be a buyback scheme put in place to entice current holders of semi-automatic weapons to return them to Police.

The Prime Minister assured that a “fair and reasonable compensation” will be given to gun-owners once the details of the scheme have been announced. Semi-automatic weapon holders are told to fill out an online form with the Police, who will then arrange for their collection and subsequent destruction.

(HAND IN YOUR FIREARMS BY CLICKING HERE)

Ardern assured these gun owners that they will “not be criminalized overnight”, and an ample period to hand-over firearms will be ensured. However, those who continue to possess these firearms after the announced buyback period will be in contravention of the law.

Current penalties provide fines of up to $4,000 and/or prison sentences of up to 3 years to anyone caught illegally possessing a firearm. The Prime Minister stated that those penalties will be increased as part of the proposed legislative changes.

She also expects the estimated expenditure of the buyback scheme to range between $100-200 million, with the vast disparity in estimates due to the fact that prior gun laws have made it impossible to determine just how many of the aforementioned weapons are in circulation.

While E-class endorsement weapons require gun registration with the Police, those who have A-licenses do not have to register their weapons. This means that if an A-license holder would acquire of a semi-automatic rifle and made the modifications previously mentioned, the Police would have no knowledge of its existence.

Despite having already announced substantial regulations, Ardern reiterated that these changes were “just the beginning” and more reforms will be made in a second tranche of announcements.

When asked why a universal gun registration scheme has not been announced, the Prime Minister stated that the matter is part of a list of further measures her Government could announce in the future. She said it was more important to act swiftly in removing the guns of concern out of circulation to prevent further atrocities from occurring.

While cracking down harshly on semi-automatic weapons, Ardern recognizes that there are responsible owners of such firearms that will be hit. She said that she hopes they will support her initiative anyway, as it holds the best interests of the country as a priority.

Semi-automatic firearms are used by many professional hunters for recreation or pest control, while farmers also use them for pest control measures as well.

Ardern did mention that legal exemptions will be provided by pest control specialists, such as Department of Conservation workers, who undertake intensive culling operations such as the proposal to reduce the number of Himalayan tahr. But she added that even in this case, strict regulations will still be put in place.

“A privilege, not a right”

Accompanying the Prime Minister was the Minister for Police, Stuart Nash. He reiterated that New Zealand gun ownership “is a privilege and not a right”, which means it is not subjected to the same legal battles that usually occur in the United States.

In New Zealand however, no such constitutional guarantee exists, which protects the Government from legal action by dogmatic firearms owners. Because of this, we can expect the proposed changes to gun legislation to happen smoothly.

In conclusion, the Government has undertaken serious measures to ensure such an incident never occurs in the country ever again. Whether firearms are the only deadly weapons the Government should worry about is another issue, but it certainly makes for a good first step.