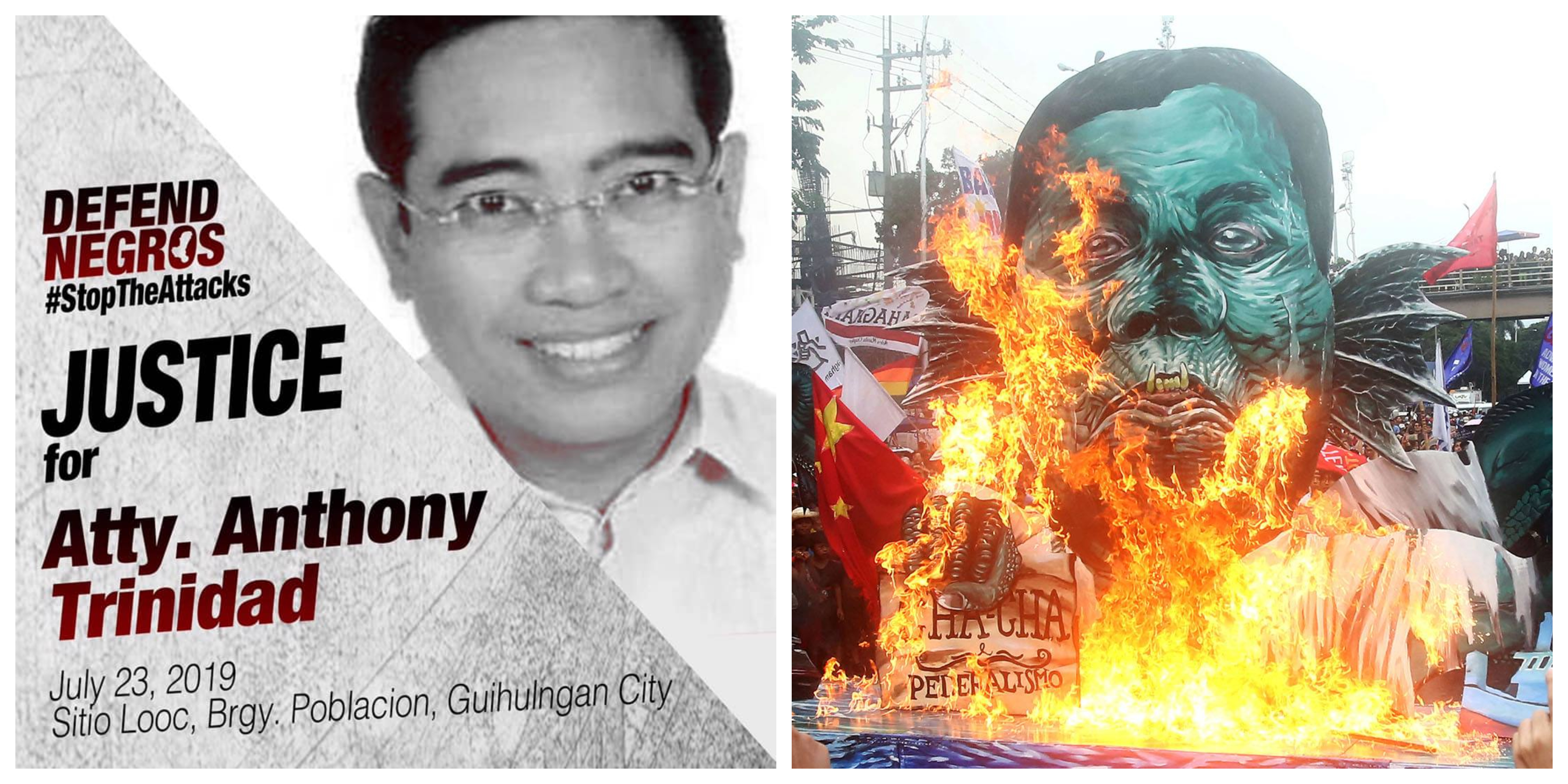 With the news of four police agents killed in an encounter with New People’s Army (NPA) rebels still fresh, the once-peaceful province of Negros Oriental has again been rocked with reports of more bloodshed.

Last 25th of July, 7 people were killed in a series of assassinations in different towns in this Visayan province – in a continuation of the bloodshed brought about by the implementation of Operation Plan Sauron (Oplan Sauron). The timing of these attacks brings one to assume that the killings are in retaliation for the deaths of the four police officers last weekend.

Even before the killings this month, the province had already witnessed several episodes of brutish killings: in March this year, 14 individuals were killed in a series of police operations. A few months prior, in December 2018, six people were killed and a further 16 were arrested in what police called “anti-crime operations”.

The spate of deaths from police-led operations begun when President Rodrigo Duterte signed Memorandum Order no.32 commanding the Armed Forces of the Philippines (AFP) and Philippine National Police (PNP) to “to undertake all necessary measures to suppress any and all forms of lawless violence in the Mindanao region and the provinces of Negros Oriental, Negros Occidental, Samar and Bicol”.

In the island of Negros, particularly in the eastern province of Negros Oriental, government forces have started Oplan Sauron to implement M.O. 32. Just this week, PNP chief Oscar Albayalde lauded the “effectiveness” of Oplan Sauron and praised the deaths of 20 individuals in less than 6 months – which most likely pertains to the massacres in March and December.

If the police force believes that the deaths of individuals for alleged crimes, without due process, is a measure of their operation’s efficacy then it is chilling to think to what ends they would go to push a self-proclaimed “anti-crime” or “anti-terrorism” drive.

The killings on the 25th of July happened a week after four police operatives were slain in an encounter with NPA rebels on the 18th of July. The PNP initially announced their men were ambushed by the rebel fighters, but later changed the story to say the victims were captured, tortured and summarily executed – which the revolutionary group vehemently denied saying they respected international conventions on the treatment of prisoners-of-war (POWs).

But on the 23rd of July, a human rights lawyer with a reputation of being associated with left-wing groups was assassinated by unknown gunmen in Guihulngan City. Anthony Trinidad’s widowed wife divulged that her husband received death threats for allegedly collaborating with the NPA, and found himself on the hitlist of a known anti-communist militia group called KAGUBAK.

Two days later, armed men ransacked a petrol station owned by the family of Trinidad, and were looking for Carlos Villarmente – the slain lawyer’s brother-in-law. Trinidad, Villarmente and his wife, Guihulngan Councilor Jessica Trinidad-Villarmente, the lawyer’s elder sister, were among 15 people tagged as supporters of the NPA in a flyer distributed by KAGUBAK.

Later that day, seven people were killed in a spate of assassinations throughout the province that police believe were committed by the same perpetrators.

In a local public school, school principal Arthur Bayawa and his sister Ardale Bayawa were both shot and killed by gunmen who stormed their homes shortly after midnight Thursday, both victims were still asleep at the time. At approximately 1:40 a.m., less than an hour later, a group of gunmen also stormed the house of local government official Romeo Alipan and shot him dead also.

Four more shootings would occur in the towns of Siaton, Santa Catalina, and Ayungon: motorcycle-riding gunmen killed Raklin Astorias in Siaton, and later than afternoon the same M.O. befell on Reden Eleuterio in Ayungon. At around 8 p.m., two people were killed and another two injured in a shooting incident in Sta. Catalina town – the fatalities included a toddler, and a man named Marlon Ocampo.

Guihulngan police chief, Lt. Col. Bonifacio Tecson, said Thursday’s attacks might have been carried out by the same group of people “because of the manner of killing”. He also believed that the armed men could be related to the suspected assassins of the lawyer Trinindad, KAGUBAK, since the killings happened on the same day as the ransacking of his family-owned petrol station.

The seven killed on the 25th of July, and the death of Anthony Trinidad two days earlier, added to the growing body count of slain civilians in the province of Negros Oriental since the signing of M.O. 32 last November. It also reinforces suspicions that these killings may be related to the government-led manhunt of suspected communists that the memorandum order commands, given the leftist reputations that Trinidad and others had.

While President Duterte may have ordered an investigation into Trinidad’s killings, he cannot absolve himself or his administration of any blame for his death given the order to intensify operations to end the long-running communist insurgency. The fact that the slain lawyer was part of a hit-list, is eerily reminiscent of the President’s notorious “narco-list” where individuals suspected of being drug addicts and drug traders get assassinated under mysterious circumstances also.

But these killings should not be a problem for this Government, the Police chief Albayalde already called Oplan Sauron a success due to its high kill count. By that logic, surely these new deaths will be seen as positive developments?

Another scenario to reflect on is whether these attacks on leftist individuals are reprisals for the losses that government forces suffered last July 18. It is long known that the military employ paramilitary units such as the CAFGU or the Alsa Masa to fight the underground revolutionary movement, it would not be surprising if KAGUBAK is another creation of theirs.

Ultimately, these killings will not cease until Oplan Sauron and M.O. 32 is in effect. For as long as there is a heightened military and police presence, Negros Oriental will continue to be a killing field.