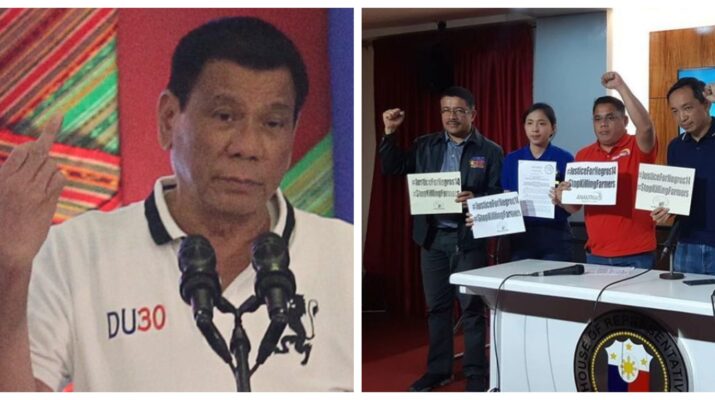 In another episode of his late-night press conferences, President Rodrigo Duterte took aim at the Makabayan Bloc – a progressive faction within the House of Representatives.

Carrying on from his usual attacks on the group, Duterte again accused the six members of Congress of being part of a “grand conspiracy” of communists who are plotting to depose him as President.

According to the President, the Makabayan Bloc and other allied left-wing organisations “no longer [follow] any ideology” and are merely driven by a desire to usurp power from him.

It is unclear how the Makabayan Bloc’s paltry six seats out of a total 304 in the House could be a threat to the Duterte administration, which commands a super-majority in the 18th Congress.

But for successive press conferences, the President has been informing the Filipino public that the greatest threat facing them is this tiny faction’s attempts to overthrow his government.

In reality, the Makabayan Bloc are pariahs in Philippine politics.  They have repeatedly experienced having their microphones turned off when they deliver privilege speeches in the House, indicating that the powers-that-be do not wish to hear their tirades against unfair labour practices or rice liberalization.

With their six seats, they comprise 1.9% of the House of Representatives and have no representation in the Senate. Being able to pass their legislative priorities is certainly mission impossible.

But the Makabayan Bloc could have some power in the House — if they agree to side with the supermajority. Other political parties have taken this route to their benefit.

The ACT-CIS Party-list are also minnows in the House; with only three seats, they are even smaller than the Makabayan Bloc. However, this group has been able to pass its legislative bills with ease simply for voting alongside the supermajority.

Similarly, the Abono Party-list only has one representative in Congress – Rep. Conrado Estrella III. Despite this, the party-list was able to install their sole congressman as a deputy speaker of the House.

Again, this is a reward for siding with the pro-government supermajority.

The Makabayan Bloc, with their six votes, could be handsomely rewarded for siding with the supermajority. But instead, they use their time in Congress to denounce the killing of farmers, the displacement of indigenous communities from their ancestral lands, or the slumping incomes of rice farmers.

If this group was “power-hungry”, why would they eschew the baubles of power and criticize the government instead?

“Balimbings” or political turncoats are also common in Philippine politics, more so in the House of Representatives. A prime example would be the way in which the Duterte administration obtained a supermajority in the House in the first place.

Despite their party candidates not winning enough seats during the 2016 elections to constitute a majority, the newly-elected Duterte government still achieved this after half of the Liberal Party – the political party of the President’s predecessor – jumped ship to join his PDP-Laban party.

With well-established parties such as the National Unity Party (NUP), Nationalist People’s Coalition (NPC), and the Nacionalista Party (NP) forging an alliance with PDP-Laban, this supermajority had complete command of the Lower House.

Part of this supermajority, back in 2016, was the Makabayan Bloc. The group were happy to support President Duterte when he considered himself a leftist and pushed for progressive endeavours.

But when Duterte capitulated on his leftist ideals, Makabayan had no qualms withdrawing their support for the administration. This meant bolting out of the supermajority and isolating themselves in Congress.

While other political parties are rushing to throw their support to whoever holds power, Makabayan members disavow the powers-that-be to uphold what they believed in.

It does not follow that the politicians who renounce lofty positions to uphold their principles are “power-hungry”. If anything, the Makabayan Bloc’s track record shows they are willing to repudiate power to affirm their stance on issues.

Rather than the Makabayan Bloc, President Duterte should instead look to his own circle of friends to find examples of power-hungry individuals. Many of the lawmakers who support him now used to back his predecessor, who he now considers his mortal enemy in politics.

By all accounts, the President’s gripe with the progressive faction seemingly stems from his inability to persuade them to bend their knee for his policy agenda.

And at a time when we are seeing a worsening economy, job losses, and a local COVID-19 outbreak that is not subsiding, we need a genuine oppositional voice to hold the powers-that-be to account.