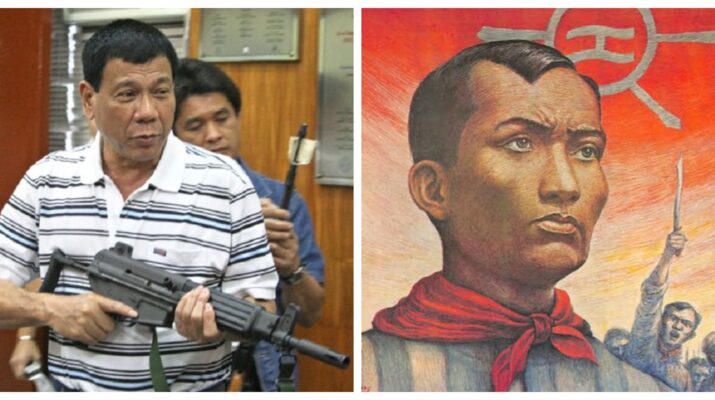 On the 30th of November, we celebrate the life and legacy of the Filipino revolutionary hero, Andres Bonifacio.

A founding member of the Philippine revolution, Bonifacio was instrumental in the fight for independence against Spanish colonial rule.

Together with other prominent national heroes like Jose Rizal and Emilio Jacinto, he was part of many secret societies that plotted the overthrow of the Spaniards.

One of these secret societies was the Katipunan, an anti-colonial organisation that sought to win independence from Spain through armed insurrection.

The discovery of this secret organisation by the Spaniards led to the outbreak of the Philippine Revolution, which culminated in our declaration of independence in 1898 – unfortunately, Bonifacio did not live to see the fruits of his efforts.

But Philippine history enshrines Bonifacio as one of its founding heroes – a paragon of Philippine patriotism and courage. Every year, on the 30th of November, politicians perform a song and dance to commemorate his sacrifice and heroism.

For his Bonifacio Day message this year, President Rodrigo Duterte called on the Filipino youth to “emulate the patriotism and courage” of the national hero.

He said the revolution Bonifacio fought “awakened the national consciousness” and served as the foundation for the Philippine Republic. Duterte has seemingly overlooked the irony in his message, or in his decision to pay homage to the legacy of Andres Bonifacio in general.

Under his administration, Filipino youths who expressed their discontent with the government have been red-tagged or accused of supporting the communist underground movement.

It was only in October that two young Filipina personalities, actress Liza Soberano and beauty queen Catriona Gray, were both given stern warnings by one of Duterte’s generals after they spoke about women’s rights issues in an online webinar.

Lt. Gen. Antonio Parlade, called out the fact that the webinar the two celebrities participated in was organised by Gabriela Youth – the youth wing of the Gabriela Women’s Party-list.

Gabriela has constantly been in the crosshairs of President Duterte, with the latter accusing the party of being part of a “communist conspiracy” to overthrow his government back in 2018.

But the online forum attended by Soberano and Gray only talked about women’s rights issues, particularly surrounding young women.

If that was enough to earn the ire of Gen. Parlade and the Duterte regime, how will they entice younger generations to speak out about pertinent issues affecting our society?

The Gabriela Party-list is part of a broader progressive coalition in the House of Representatives called the Makabayan Bloc. Like Gabriela, the other parties comprising this faction have been targeted by the Duterte regime as well.

During his Bonifacio Day national address, the President himself reiterated that Makabayan is actually a front for the communist underground movement.

Repeating the charge he made against Gabriela, Duterte accused the group of being part of a communist “grand conspiracy” hell-bent on ousting him from power.

But two years have passed since he first raised those accusations in 2018 and no coup ever materialised, certainly not one perpetrated by the Makabayan Bloc.

Rather, they cop criticism for leading protests against the government on a myriad of social issues.

Kabataan Party-list – a Makabayan Bloc member party that represents the youth sector – led calls for the government to implement an academic break, to give students a respite from their academic obligations amid the COVID-19 pandemic.

This is a sensible advocacy that represents the grievances of our youth, exactly what a member of the House of Representatives should be doing.

Likewise, the Gabriela Party-list has been a staunch advocate for women’s issues. They have consistently called out President Duterte’s misogynistic remarks and have led protests denouncing them.

Another Makabayan Bloc member, the Alliance of Concerned Teachers (ACT-Teachers) Party-list, has organised marches demanding for better pay for educators. As they are a party that represents teachers and educators, this is a relevant issue for them to advocate for.

While it’s true these Makabayan Bloc activists are actively organising protests against the Duterte regime, none of their actions can be construed as subversive.

They’ve done precisely what their role – as members of the House of Representatives – requires them to do: to represent the people.

The Makabayan Bloc’s dissent stems from a critique of society, they identify societal ills and call for reform. This is not an act of treason or rebellion, in fact, it is a necessary component of a well-functioning democracy.

Acolytes of the Duterte regime – and even President Duterte himself – would like to paint their actions as seditious and associate the Makabayan Bloc with the communist rebellion, while at the same time praise Andres Bonifacio’s legacy.

What the Regime fails to recognise is that had Bonifacio been alive today, he would be an activist himself who aligned with the Makabayan Bloc. In turn, he would be red-tagged and constantly maligned by the Duterte regime.

Thus, when we commemorate the life of Andres Bonifacio every 30th November we should carefully examine what his memory teaches us. It is very straightforward: to question authority and to love your country above anything else.

And to love your country does not entail your obedience to its government.