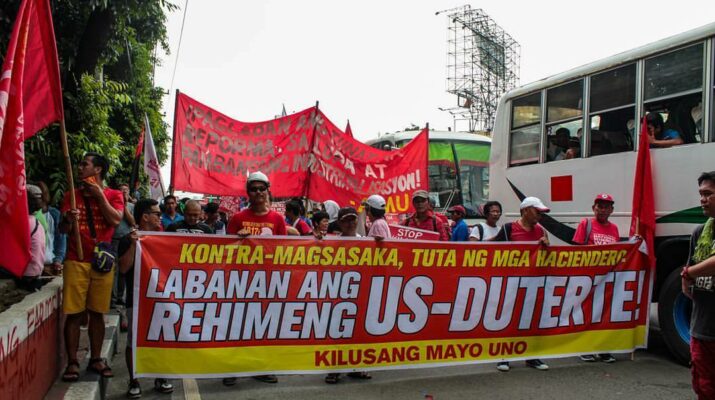 President Rodrigo Duterte has never been shy to voice out criticism towards the United States. In 2016 he called their former President Barack Obama a “son of a whore”, the following year he vowed “never to visit” the US which he called a “lousy” country.

In fact, early in his term – during a state visit to China in 2016 – Duterte declared that he was “separating” from the US and that he would “realign” the Philippines to ally with the Asian superpower and with Putin’s Russia instead. However, he would later clarify that he was not severing diplomatic nor military ties with the US with his remarks.

Regardless, President Duterte is differentiating himself from his predecessors as a Philippine leader who is not going to kowtow to Washington’s every command. A colony of the U.S. from 1898 to 1946, the Philippines maintains very strong links with the global superpower and has fought alongside them in nearly every post-WWII conflict since: the Korean War, the Vietnam War, Iraq 1991 & 2003, you name it.

Hence, while independence was attained in 1946 it is strongly argued that the Philippines remained a “semi-colony” of the U.S. — one that is not officially a colony but retains the same level of servitude towards the hegemonic country. This imbalance in the two countries’ bilateral relations is a substantial part of Duterte’s populist messaging: portraying himself as the leader who would finally put Filipino interests first.

But despite the rhetoric, Duterte’s supposed anti-Americanism always appeared superficial. His tone towards the U.S. noticeably tamed when Donald Trump was elected President in late 2016, even bizarrely singing a love song to the American leader in November 2017 during the ASEAN Summit in Manila.

However, the recent tensions involving Iran and the US produced the clearest indication that the Philippines still remains a semi-colonial estate of the US even during the administration of President Duterte. During a press briefing, Presidential Spokesperson Salvador Panelo declared that Duterte will side with the US should there be a war with Iran.

The spokesperson was explicit in his pronouncement: “We will not be neutral,” he told the media. Panelo made those remarks with the backdrop of protecting the lives of Overseas Filipino Workers (OFWs), rhetorically asking: “If they kill Filipinos, do you want us to stay mum?”

Panelo’s remarks are predicated on the assumption that Iran would target Filipino nationals living in the Gulf, since the Philippines is a major ally of the U.S. But that theory holds little weight since it is the latter who are the aggressors in these recent tensions, U.S. forces conducted a successful aerial strike to assassinate acclaimed Iranian general Qasem Soleimani, fanning the flames of an already turbulent relationship.

So far, Iran’s response to the attack is a warning of a military response on “US military sites”. Their riposte is markedly more level-headed than that of President Trump’s, who threatened to attack Iranian cultural heritage sites should the Middle Eastern nation retaliate militarily —- a violation of international laws and conventions.

Despite it being clear who the aggressor in this debacle is, Spokesperson Panelo wants us to believe that Filipinos should be more perturbed with Iran rather than the U.S. There have been no indication that the Gulf nation plans to target any civilians, not even Americans, and yet we are supposed to believe that Filipino civilians are now in danger from Iranian aggression?

If anything, it is Panelo’s statements which has placed Filipinos living and working in the Middle East in danger. He has declared that the Philippines will be in connivance with the U.S. should there be a war, this – in a sense – gives Iran a reason to put Filipinos in its cross-hairs, when there was none to begin with.

However, the views of Spokesperson Panel (and by extension President Duterte’s, given that the former is his official mouthpiece) indicates that the promise of an “independent foreign policy” his boss likes to repeat is mere lip-service. The Philippines, post-1946, continues to be a semi-colonial estate of the United States — one that will blindly follow it to war should the hegemonic power requires it to do so.

Shortly after the death of Soleimani, the topic of “World War 3” was trending on social media discussions. People around the world expressed fear that the mindless act of aggression by President Trump would spark a new era of global warfare.

Should a new world war break out it is clear that much like his predecessors, President Duterte would needlessly throw the Philippines in support of its colonial master. Panelo’s pronouncement was a display of fealty by the Duterte administration to the U.S., regardless of what our commander-in-chief’s comments may indicate.