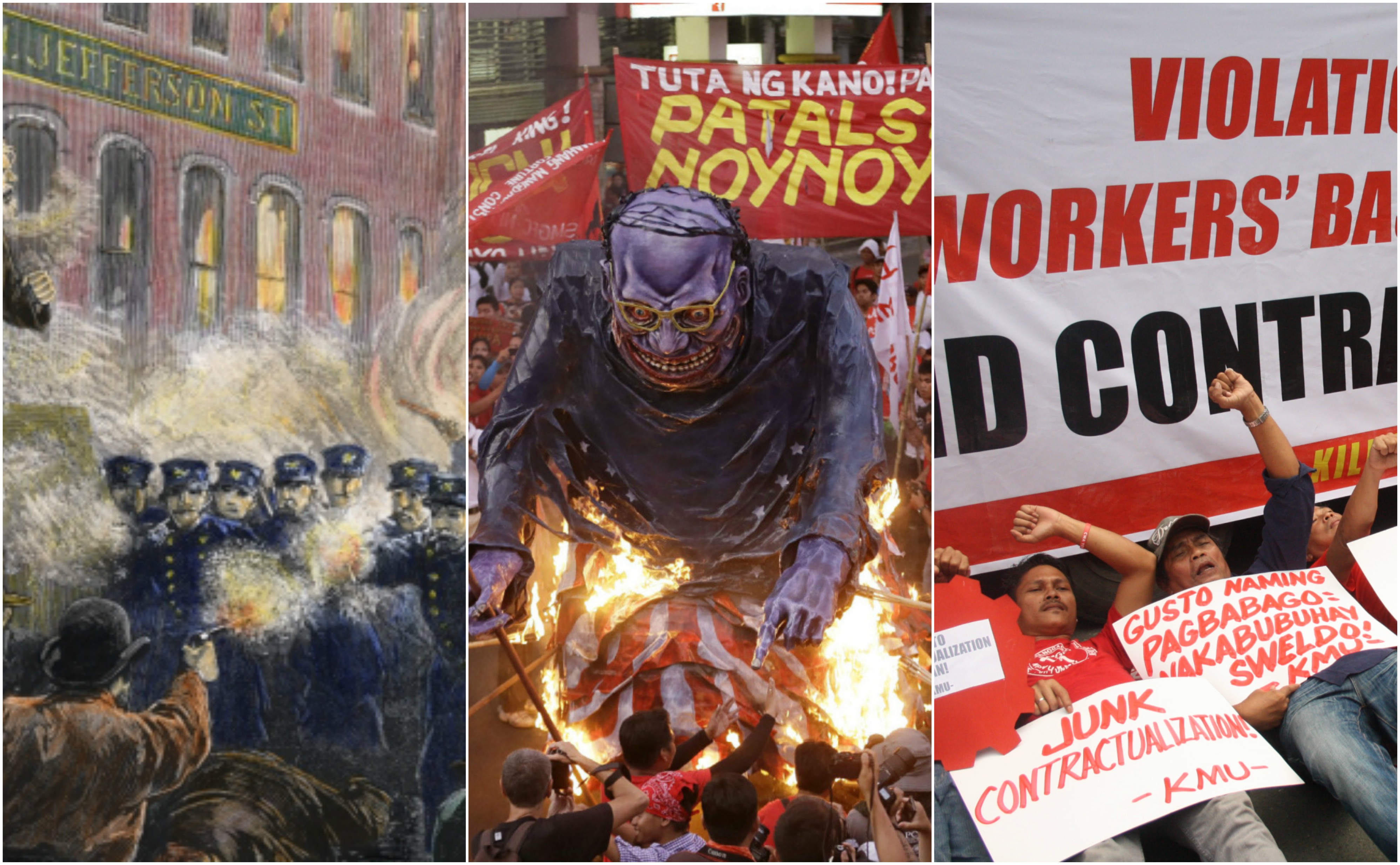 Aside from a day off from work, another expected feature on Labour Day are the protest demonstrations or rallies conducted by different advocacy groups.

The May 1st public holiday is a day to celebrate the importance of working class labourers to Philippine society, these workers include those employed in factories, haciendas, and farmlands among many. These labourers are often the most marginalized in society, whose income barely make ends meet and work under grueling conditions.

The Labour Day rallies, or May Day rallies, becomes an outlet for these workers to demand better pay, more humane work conditions or protest unfair government policies. They are joined by activists from various advocacy groups, as well as progressive politicians, in solidarity of their plight and to amplify their cries for the government of the day to hear.

Holding protest demonstrations is a democratic right, and demanding that the elected government cater to your grievances is completely rational and yet, the general public are often critical of such rallies. When the protests begin, we commonly hear broadcasters, TV personalities and even ordinary citizens voicing their contempt for these protesters – branding them as nuisances and seeing their actions as an act of sedition.

“Rallying” has become a bad word synonymous to being a criminal, and is often dismissed to be a useless endeavour that benefits no one.

Such verdict reeks of ignorance. Those who pass such judgment are oblivious to the benefits they enjoy in their own private lives that were borne out of “pesky” rallies.

Most of us enjoy the day off from work for the Labour Day public holiday, we find time to bond with family and friends, or to recuperate from work or to find time doing recreational activities we deprive ourselves off because of our busy work schedules.

The reason why most countries adopt a national public holiday on Labour Day is to commemorate the 1886 Haymarket Massacre: on the 4th of May that year in Chicago, a dozen were killed and scores of activists arrested simply for demanding better work hours. Anarchists critical of the growing labour movement of the day threw a dynamite bomb at the peaceful demonstration by the working class, just a day earlier another seven working class protesters were also killed by Chicago police for their demonstration.

The terrorists behind the violent attack held the same contempt for the protesters as those who do so today either on social media or on public broadcast. These critics view these actions as wrongful and insidious, when in reality the protesters during the Haymarket Massacre were merely demanding shorter work hours from the 10-16 hour work days common at that time.

This brings up another important contribution by “rallyists”, the eight-hour work day and the five-day work week. At the dawn of the Industrial Revolution, factory owners wanted to keep their production running for long hours each day in order to maximize output – most implemented a “sun up, sun down” daily schedule.

This was detrimental for its human workers as forced to work under harsh conditions for an average of 10-16 hours per day, with very little breaks in-between, six days a week. One of the more benevolent capitalists of that time, British textile manufacturer Robert Owen, called for shorter work hours to allow the workers to recuperate – initially calling for a ten-hour work day.

By 1817, Owen formulated that work days should be divided into three parts – a third for labour, another third for rest and the final third for recreational activities. Thus, the eight hour labour movement was born.

The desired reforms were not immediately met, it took several strike actions by industrial workers and protests by trade unions – like the one which led to the Haymarket Massacre – to slowly achieve the eight-hour workday. In 1900, the Building Trades Council (BTC) of San Francisco organized a strike action to demand an eight-hour work day which they achieved after an arbitration process with mill owners.

In 1915, railroad workers in the United States conducted numerous strike actions to demand better work hours and achieved it with the Adamson Act of 1916 which mandated that railroad workers work a maximum of eight hours per day only. Strike action and protests in the late 1930s pressured U.S. Congress to pass the Fair Labour Standards Act of 1938 which stipulates a 44-hour workweek for all American workers, it was later amended in 1940 further limiting a workweek to 40 hours.

Before then, only the Christian Sabbath day of Sunday was observed as a non-working day – which meant workers effectively laboured for six days a week – but restricting workweeks to 40 hours gave workers another day off. These protests and rallies are what gave us the weekend which we all enjoy today, whether you are a student, a labourer or a professional.

We use the two-weekend to spend time with our family, to enjoy recreational activities or to just recharge ourselves – physically and mentally – after five days of work.  Most of us benefit in some form from this reprieve from labour, so why do many loathe protesters when it was their collective action that granted us this benefit?

If anything, we should be grateful to those who bravely troop to the streets and protest every Labour Day – because their efforts ensure we continue to work under safe, humane conditions. Protesters should be considered “brave” because these mass demonstrations are often met harshly by police forces, resulting in their injuries and sometimes even their deaths.

It is a risky endeavour, and yet they relentless pursue such actions to forward causes that benefit even those who do not join them, even those who put them down.

The unfortunate reality is that the fourty-hour workweek is not strictly observed around the world today, many still work under slave-like conditions, labouring long hours and very little pay. This is why May Day protests occur even to this day, almost two centuries after the eight-hour movement begun.

Rather than holding them in contempt, we should rally behind the rallyists – provide moral support or even join them in protest if we can – in order to ensure that every human being gets a decent work schedule.