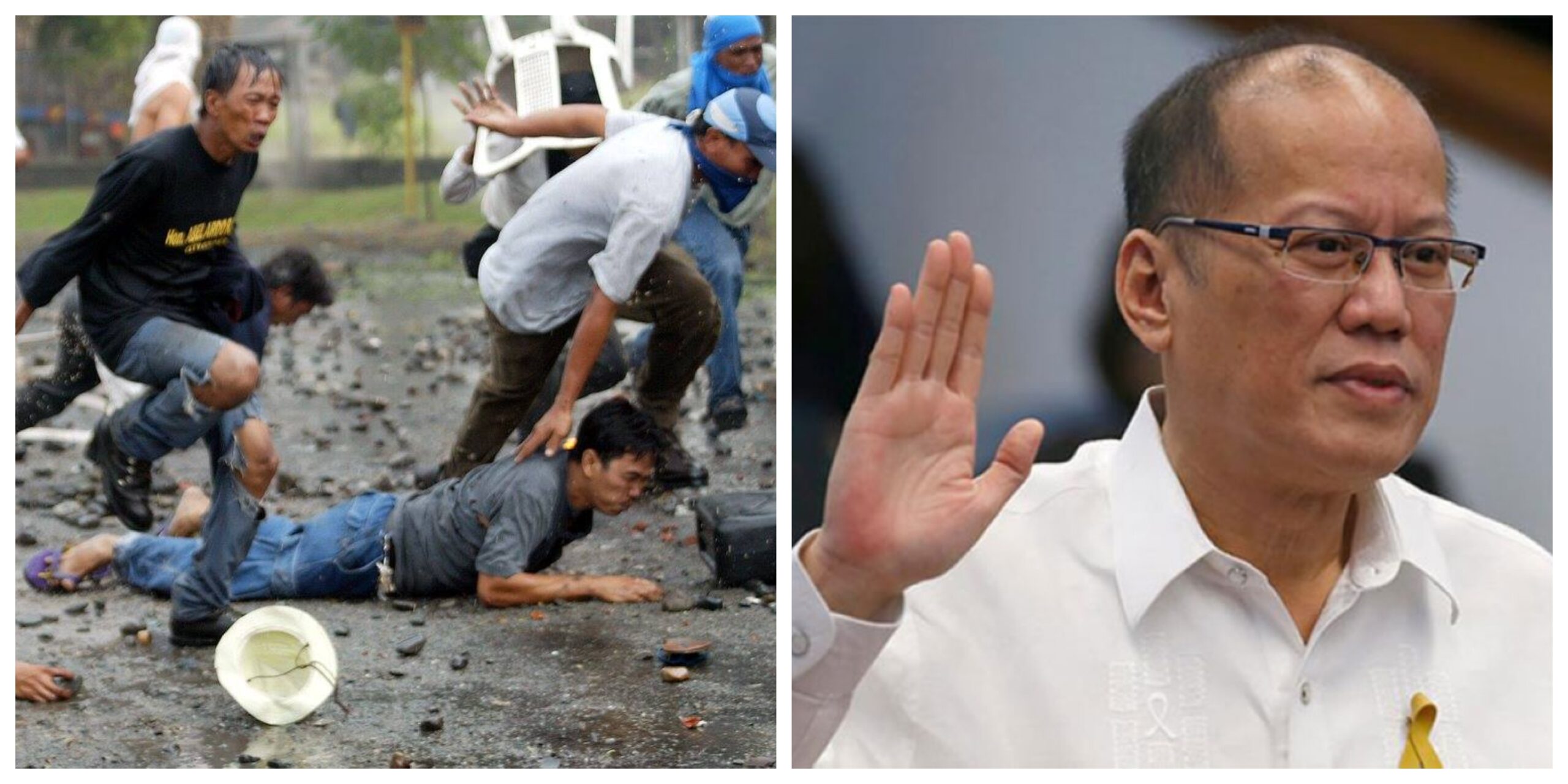 When workers go on strike, they are calling for better work conditions and an increase in pay. But in November 2004, when thousands of workers of the Hacienda Luisita sugar plantation went on strike they received bullets instead.

The 16th of November marks the anniversary of the brutal dispersal of striking workers in the province of Tarlac. They were members of the United Luisita Workers Union (ULWU), and were calling for a meager pay raise of Php9.50, improved workers’ benefits, and a commitment to agrarian reform – which had become law seventeen years before this incident.

In what would be later remembered in history as the infamous “Hacienda Luisita Massacre”, seven protesters died and a staggering 122 more were injured. Those numbers are more akin to the casualties of a armed battle, not a dispersal of unarmed peasants on strike.

What made the incident more notorious is that the plantation is owned by the powerful Cojuangco-Aquino clan, the oligarchs of Tarlac province. Members of their family include two former presidents – Corazon (or Cory) and Benigno III (or Noynoy) Aquino – and a highly-popular celebrity, Kris Aquino.

The influence the family wielded in both politics and show-business meant that attaining justice for the workers was a pipedream, knowing the unfair power balance in the Philippines. And this became clear when, during a speech in the House of Representatives, Noynoy Aquino – who at that time was the deputy speaker – downplayed the atrocity and even said the dispersal was “justified”.

“It is an illegal strike, no strike vote was called,” the then-Tarlac representative said during his privilege speech. Aquino supported the dispersal of the striking workers despite the barbaric measures used by state forces, including the use of armoured personnel carriers (APCs) of the Philippine Military.

But organizing a strike is the democratic right of all workers. Prior to the decision by the unionised workers to go on strike, their union representatives were engaged in wage negotiations with the hacienda’s management – but were in a deadlock.

Making matters worse, rather than meeting the demands of the plantation workers the Hacienda’s management retrenched 327 of them in October 2004. Sensing no other means to assert their demands, these farm and sugar mill workers barricaded the gates of the Hacienda Luisita starting on the 6th of November 2004.

Not only were the workers justified in their strike, their demands also had grounds for consideration.

The 6,453-hectare Hacienda Luisita plantation once belonged to the Spanish Crown, by virtue of Spanish colonisation over the Philippines. The privately-owned Compaña General de Tabacos de Filipinas (Tabacalera) acquired the land in 1882, and eventually put it up for sale again in the 1950s facing concerns about the growing rebellion of the HUKBALAHAP guerrillas. [SOURCE]

It was Cory Aquino’s father, local businessman Jose Cojuangco, Sr, who was tapped by then-President Ramon Magsaysay to purchase the land and sugar mill from Tabacalera. It is widely believed that the President annointed Cojuangco, Sr as the next owner of Hacienda Luisita as he was the father-in-law of then-Senator Benigno “Ninoy” Aquino, Jr – Magsaysay’s protege and a rising star in Philippines politics at that time.

While Cojuangco, Sr was a wealthy man in his own right, he needed an infusion of capital to afford the purchase. President Magsaysay, with the help of Senator Aquino, Jr, helped the businessman obtain a dollar-loan from the Manufacturer’s Trust Company (MTC) in New York to purchase the sugar mill, and a peso-loan from the Government Service Insurance System (GSIS) to purchase the hacienda itself.

The Philippine’s Central Bank (CB) had to intervene to ensure that Cojuangco, Sr could successfully secure the dollar-loan from the MTC. But the CB’s intervention was at a cost, in return the Cojuangco-Aquino clan had to acquire Hacienda Luisita “with a view to distributing the hacienda to small farmers” in the future.

As early as 1957, the promise of land reform was already given to farmers working in the Hacienda Luisita.

The peso-loan was approved by the GSIS on condition that the Cojuango-Aquino clan would see that the Hacienda be “subdivided among the tenants who shall pay the cost thereof under reasonable terms and conditions,” – in other words, be subjected to land reform. But cunningly, the Cojuangco family patriarch had maneuvered the wording to instead state: “…shall be sold at cost to tenants, should there be any”.

That modification would form the basis of the hacienderos’ justification not to subdivide the land in upcoming years, despite the terms of their loans explicitly requiring such. Regardless, the government of President Magsaysay set a 10-year timeframe for the Cojuangco-Aquino clan to redistribute the plantation – but that would prove to be a pipedream.

Going beyond the loan conditions entered into by Jose Cojuangco, Sr there is a law that mandates land reform. The Comprehensive Agrarian Reform Law (CARL) passed in 1987, mandating the redistribution of private and public agricultural lands to help the beneficiaries survive as small independent farmers, regardless of the “tenurial” arrangement.

The irony of it all is that it was Noynoy’s mother, Cory, who initiated land reform in the Philippines during her term as President from 1986-1992. The striking workers included land reform as part of their demands, and if the Aquino political clan were serious in their push for land reform this would not have been a problem.

Land reform law was passed in 1987, seventeen years before the Hacienda Luisita massacre. Why hadn’t the plantation land been distributed to small farmers during that time period? Had Cory made good on her promise of agrarian reform, perhaps the deadly aftermath of the workers’ strike would never have happened.

But the most heinous aspect of the Hacienda Luisita massacre is that fifteen years on, justice has not yet been met by the victims. More so, the pursuit of justice by the victims and other human rights activists have been stymied and obstructed by the influence of the Cojuangco-Aquino oligarchy.

In 2010, under the administration of now President Noynoy Aquino, the Ombudsman dismissed all charges against the police and military personnel involved in the violent dispersal. Aquino had only assumed the presidency that year, and one of the first major decisions to come out of his six-year term was to absolve the crimes committed by his family – if that is not a blatant example of impunity, it is hard to determine what is.

Though it is important to note that the impunity begun well before the second Aquino presidency. Shortly after the brutal crackdown on November 6, 2004, eight individuals who had evidence against the hacienda’s management and the violence of the state authorities were mysteriously assassinated one by one.

These developments proved that attaining justice for the victims of the Hacienda Luisita massacre would be a fool’s errand – simply because it is a battle against a powerful oligarchic family. Fifteen years have passed since that bloody day, and no one has been sentenced to prison for the dastardly acts committed against impoverished peasants seeking a better life.

As we remember the massacre, we should also realise that while the present regime of Rodrigo Duterte indulges in injustices of its own, impunity did not arise during his administration. The mere fact that 6,453 hectares of arable land was in the hands of the Spanish Crown by virtue of expropriation meant that impunity had arisen as early as 19th-century Philippines.

Impunity is a recurring theme that can be found throughout Philippine history, and it is always the ordinary Filipino people on the receiving end of it and the elites that perpetrate it.

6 thoughts on “Remembering the Hacienda Luisita Massacre: A reminder that impunity is nothing new in the Philippines”