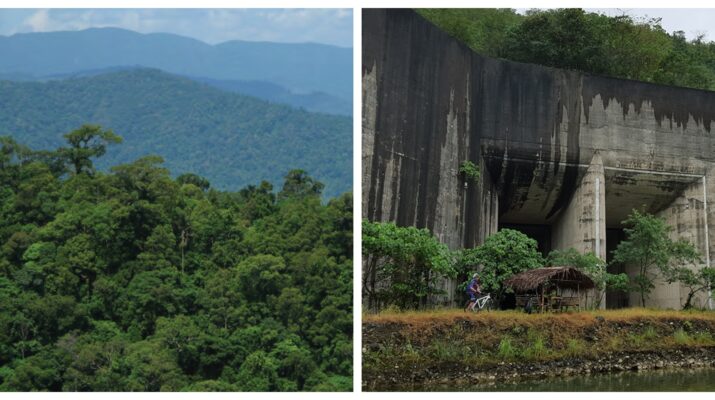 Spanning over 540 kilometres, it is the country’s longest mountain range. The length of the Sierra Madre extends from Cagayan province in the north to Quezon province in the south, encompassing a combined population of 50 million people.

Not only is it home to a diverse range of flora and fauna, including the endangered Philippine eagle, but this land formation also serves a critical purpose in disaster risk reduction.

The towering nature of the Sierra Madre and its location on the outer edges of Luzon act as a barrier to incoming typhoons from the Pacific. These mountain ranges absorb the worst of incoming typhoons, weakening them before they hit towns and cities nearby.

In 2018, the mountain range stifled what was considered the strongest typhoon of that year. Typhoon Ompong (international name Mangkhut) was expected to bring sustained winds of 220 kilometres per hour, but after encountering the mighty Sierra Madre it slowed down to 160 kilometres per hour before hitting civilian communities.

It likewise did the same in 2006, as the country braced for Typhoon Queenie. The weather disturbance was predicted to devastate the Luzon region with sustained winds of 200 kilometres per hour, which weakened to 140 kilometres per hour after interacting with the Sierra Madre.

The Philippines is located in the outer rim of the Pacific Ocean, near the equator, and thus a hotbed for extreme weather events.

With poor infrastructure and a disorganised disaster response system, the country constantly suffers from high casualties and severe collateral damage from storms.

Which is why the Sierra Madre mountain range is so crucial to its future – this natural land formation will both save lives and infrastructure. But despite its obvious importance, the Sierra Madre is under threat from human activity.

For one, illegal logging is causing rapid deforestation of the mountain range’s once thick forests. In 2010, the Department of Environment and Natural Resources (DENR) recorded a total loss of 161,240 hectares of forest from 1988 – this was mostly attributed to illegal logging.

Major threats to the Sierra Madre also include mining and urban development – such as the construction of roads – in the mountain range.

However, these human activities are minuscule compared to the potential threat the proposed Kaliwa Dam imposes on the Sierra Madre.

The Php18.7 billion dam project was first conceptualised during the era of President Ferdinand Marcos. It was revived under the Duterte administration after Manila suffered a severe water shortage in 2019.

President Rodrigo Duterte himself pushed for the completion of the dam, endorsing it as a means to ensure better water supply to the ever-growing Greater Manila region. His goal inched closer to fruition after his government secured a US$211 million loan from China.

It is a project that will be costly to the Filipino people, not because the loan deal with China “onerous”, but constructing the dam will also lead to the ruin of the Sierra Madre mountain range.

These pronouncements recognise the ecological significance of the Kaliwa Watershed. Constructing the dam violates the protected status of the area, it would endanger the flora and fauna that inhabit it and also risks contaminating the water quality of the watershed.

The Haribon Foundation – a conservation group that caters to the survival of the Philippine eagle – said the construction of the dam will “ravage the homes of thousands of threatened wildlife species” in the Sierra Madre, including of the rare bird.

Building the dam will also affect indigenous communities who have called the Sierra Madre their home for generations. The Dumagat-Remontado have ancestral domain claims in the area where the Kaliwa dam will be located, its construction will mean flooding the lands their ancestors once lived in.

When the dam inundates their communities in the provinces of Quezon and Rizal, the Dumagats expect as many as 14,000 households will be displaced and in need of new housing.

The group is no stranger to the existential threat the Kaliwa dam imposes on their ancestral lands, they already defeated a similar proposal in 2009 under then-President Gloria Macapagal-Arroyo. But now they face the same problem under President Duterte who is determined to see the project completed.

In March 2019, his Finance Secretary Carlos Dominguez III even called to expedite the project without any thoughts spared for the plight of the Dumagat-Remontados.

The Kaliwa Dam will destroy the biodiversity of the Sierra Madre forests and displace thousands of indigenous people who have lived there for generations. But in addition, it will also cripple the country’s frontier defense against strong typhoons emerging from the Pacific Ocean.

After the country was smashed by four straight typhoons in as many weeks, the Philippine government should recognise the importance of the Sierra Madre mountain range.

Two of those recent typhoons – Rolly and Ulysses – were both shown to have weakened after encountering the Sierra Madre. Seeing how badly both weather disturbances have affected the country, it is frightening to imagine how worse it could’ve been had the mountain range not been in their path.

This should make us appreciate the Sierra Madre, not set out to destroy it which is what the Kaliwa Dam will do. The infrastructure project will not only ruin the biodiversity already residing inside the Sierra Madre’s forests but will also compromise our country’s ability to deal with typhoons in the future.

If we want to save the Sierra Madre, we must ensure the Kaliwa Dam will never be built.

5 thoughts on “To save the Sierra Madre, the Kaliwa Dam project must be scrapped”