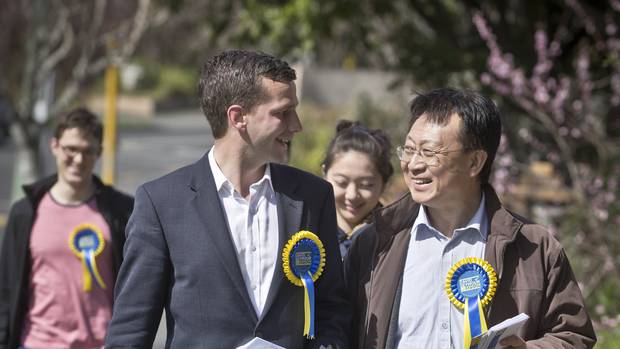 This weekend the ACT Party underwent a rebranding: a rehashing of its image, its messaging, and its brand of politics undoubtedly in preparation for the 2020 general elections.

At the forefront of this reinvigorated branding is a new focus to ‘protect freedom’; at its annual conference held in their sole MP David Seymour’s Epsom electorate, the party unveiled a proposed member’s bill called the “Freedom to Speak” bill. This new legislation would “protect freedom of speech” by repealing parts of the Human Rights Act and Summary Offences Act that makes offensive or insulting language unlawful.

While the bill fits nicely into ACT’s libertarian identity, it also signals a shift in targeted voter demographic. After the devastating result the party received in the 2017 elections, when they only garnered a little more than 13,000 party votes representing 0.5% of the total vote, they needed to find a formula to survive – especially given that their continued existence is due to the National Party “gifting” them the electorate seat of Epsom.

ACT’s continued hold on that electorate ensures their presence in Parliament, but with a dismal party vote that means they only get one seat in the entire legislature – barely any influence to affect national policy. This brand revamp is intended to win more party votes and to delineate themselves from the National Party, seeing as they both occupy the right-wing of the spectrum.

The genesis of the ACT Party

The party was formed in 1994 by disgruntled ex-Labour Party MP Roger Douglas (of Rogernomics fame) and ex-National MP Derek Quigley. It was established as a continuation of the 1984 Labour Government’s neoliberal policies, and focused on deregulation of industries, trade liberalization and tax reform policies.

In short, the original ACT party held the identity of a “small government, pro-individual freedom” entity akin to that of the United States’ Tea Party movement. From their inception until the early half of this decade, the party focused on the economic aspects of libertarian ideology – their 2008 campaign with Rodney Hide as leader focused on cutting the top tax rate and removing many Resource Management Act (RMA) regulations.

While the party increased their number of MPs from only two after the 2005 elections, to five in the 2008 elections, it is debatable if this economic focus was behind their resurgence. That year marked the (temporary) demise of the New Zealand First party, with party leader Hide playing a key role in attacking NZ First – thereby shedding many of NZ First’s voters.

After recruiting former National Party leader Don Brash into their ranks shortly before the 2011 elections, ACT embarked on a new focus by attacking what Brash called “Māori special legal status” such as the Māori electorate seats, the Māori special advisory boards and mandatory consultation talks with iwi as stated in the RMA.

The former Reserve Bank governor gained notoriety after delivering an infamous speech in 2004 speaking out against Māori rights, and advocating “one law for all” – Brash was the leader of the National Party at that time, but he made it clear his messaging with ACT would remain the same.

Part of this new experiment ACT embarked on was an increased focus on law and order. The same year Brash was introduced as their leader, the party won a concession with the National party to introduce the “three strikes” policy – mandating maximum sentencing to offenders who fall afoul of the law for the third time.

ACT also campaigned on introducing an automatic life sentence for those convicted of first-degree murders and tougher penalties for juvenile crime “to discourage them from serious offending”. With Brash as their leader, ACT mixed right-wing populism with their traditional economic libertarian ethos.

This new approach undoubtedly failed, because the party won only one seat in the 2011 elections – their lifeline Epsom electorate – losing 4 seats in the process. Even worse, their own leader Brash failed to win a seat for himself making former Auckland City mayor John Banks ACT’s only representative in Parliament.

However, it is unfair to blame ACT’s failure only on Brash’s new messaging, a significant story of that election was NZ First’s resurrection from political death – returning to Parliament with 6.5% of the party vote. The libertarian party’s partner in government, National, also improved their party vote evidently taking votes from ACT in the process also.

Thinking ACT’s fortunes with party leaders could not get any worse, Banks did not return to contest the 2014 general elections after being convicted for unlawful campaign donations from businessman Kim Dotcom during the former’s 2010 mayoralty campaign. Leading to the upcoming elections, the party turned to philosopher and academic Dr. Jamie Whyte to lead their campaign.

Under Dr. Whyte, ACT emphasized mostly an intellectual justification for libertarian thought – undoubtedly influenced by the academic background of their new leader. By embracing a purely philosophical position, the party landed into many serious problems; a prominent example of which was when Whyte defended that incestuous relationships between consenting adults should be legal.

From a philosophical standpoint, it made sense given that libertarianism advocates for minimal government interventions into the personal lives of its citizens and if two adults entered into a consensual relationship, a purely libertarian approach would not find a problem with that. However, it was truly damaging for the ACT party and made Whyte backtrack on those statements eventually.

Playing also an important role in their 2014 campaign was their then-deputy leader, Kenneth Wang, who advertised ACT as the “natural party for new New Zealanders”. The businessman has a prominent profile in the Auckland Chinese community, and the party relied on him to sway many Chinese voters to choose ACT during that year’s election.

By shifting the focus away from their policies on race relations and law and order, and instead on an intellectual approach to their political philosophy as well as to court a new demographic, the ACT party hoped to regain the voters they lost to their government partner, National.

The latter party’s image under former leader John Key was that of a level-headed, moderate party – and by moving away from contentious policies ACT were aiming to win “middle-of-the-road” voters.

Unfortunately, again this formula did not seem to work for ACT – they fell below 1% of the party vote in the 2014 general elections and again only returning their MP for Epsom, David Seymour, as their only representative. A month later, the inevitable happened with Dr. Whyte resigning as party leader thus leaving the party’s fate solely on the hands of a young newly-elected MP.

While there were doubts initially about Seymour’s capability to both lead a party and be an electorate representative during his first time as an MP, being in his second-term in office it can be said that he has a firm grip on his responsibilities. He has proven to be an apt ambassador for the ACT brand, and has become a popular figure in the Epsom electorate.

The challenge Seymour faces now is if he can raise ACT to the level of having more than just one MP. In the most recent elections, he failed that task as the ACT party vote sunk even lower than their 2014 result – with only 13,075 voters choosing them, indicating their lowest ever party vote percentage in their history.

It was somewhat expected since the 2017 general elections turned into a two-horse race between Labour and National, squeezing votes out of the smaller parties. But what also contributed to ACT’s disappointing result was their confused messaging during the campaign.

Unlike examples of the past, ACT did not choose either a purely libertarian route or a hybrid with right-wing populism. Instead, it was all these at once along with a more centrist policy of increasing teachers’ pay if they leave the teachers union.

The party did not differentiate themselves significantly from National, in fact during the campaign they staked their fortune on the latter party’s popularity – emphasizing that voting for ACT would give National “a stable centre-right coalition partner”. In short, ACT in 2017 did not focus on building their own brand – banking on the popularity of Seymour and their friendship with National – and this was admitted by the party leader himself.

There was a lot of disgruntled ACT members over their 2017 performance, including Kenneth Wang who resigned last year because he felt “the party had moved away from policies that attracted him to it in the first place”. Losing their old stalwarts was an indication that during the era of David Seymour, ACT was charting an entirely new path from that identity they started with.

Soul-searching during times of desperation

From a party of statesmen who evoked competence, and intellectuals who devised new ideas consistent with the libertarian ethos, ACT has found itself reduced to a mere convenient coalition partner with a leader that only has the ability to connect with the youth to boast of. Such a decline in reputation (and capabilities) has undoubtedly led to their decline in popularity and lost of identity.

Thus, this latest party rebrand is Seymour’s final roll of the dice. With a targeted focus on freedom and personal liberties, he hopes that voters disgruntled with the recent policy change on firearms ownership and rumours of the Green Party introducing laws on hate speech will improve ACT’s fortunes.

The best news for Seymour is that this move is virtually risk-free, at 0.5% of the party-vote it is not like ACT has a lot to lose. At this point, the party should be open to any new experiment to reinvigorate their hopes of survival – whether it will be enough or not can only be determined with the litmus test of a general election.

One thought on “A party soul-searching: Understanding the ACT Party’s identity crisis”