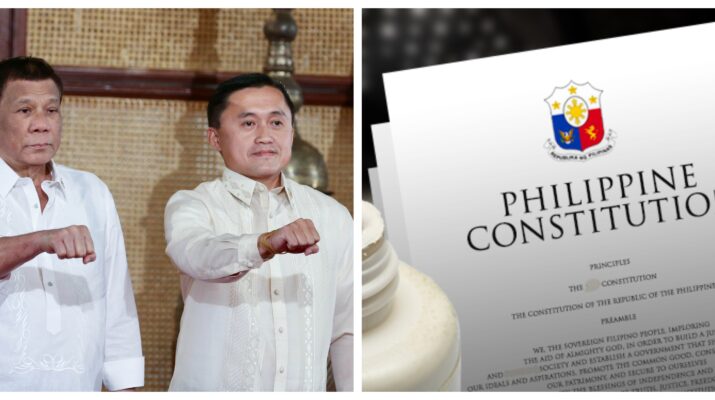 In another plot twist in the 2022 Election season, long-time aide to President Rodrigo Duterte and Senator Bong Go has announced his candidacy for the Vice-Presidency.

The ruling party, Partido Demokratiko Pilipino – Lakas ng Bayan (PDP-LABAN), had earlier nominated Go and President Duterte to be their candidates for President and Vice-President, respectively.

However, Go declined the nomination for the nation’s highest post, insisting he is not interested. Duterte on the other hand accepted the nomination as VP and it was expected that he would officially file as a candidate.

Surprisingly, the sitting Chief Executive announced his retirement from politics instead. Whether it is a sincere declaration or not is unknown, Duterte has until November 15 to change his mind and substitute himself in the presidential race.

But the question of whether Duterte will abandon politics is a moot point if Go is in the running. Before being elected as a senator, Go was known as the President’s trusted personal aide – essentially the latter’s right-hand man.

During the 2016 election, Go earned the nickname, the “national photobomber”, from the media as he was always photographed next to Duterte. That is a testament to his devotion to the former Davao City mayor-turned-President.

Their story began when Go was only 24 years old and landed himself a job as Duterte’s aide, who was at that point a congressman representing Davao City’s 1st district. The college graduate would serve at his master’s side for the next few decades, becoming Duterte’s chief-of-staff in 2010.

When Duterte assumed the Presidency in 2016, Go was appointed as the Special Presidential Adviser (SAP). He was also given supervision of the Presidential Management Staff (PMS) – an agency tasked to oversee the President’s work programme.

Go carried on being Duterte’s right-hand man even as the latter became President. Their closeness was widely noted in the media, and it is primarily the reason for Go’s success during the 2019 Senatorial elections.

In that race, Go finished with the third-highest number of votes despite only polling at 5.9 per cent of voter preference less than a year before the election. His proximity to the President, who was resoundingly popular at that time, was credited for Go’s mercurial rise in popularity.

Go’s victory was not only important to the Duterte administration because he’s an ally, but he acted essentially as a proxy to the President in the Senate. Shortly after his election win, Go said that he will act as the “eyes and ears” of the President in the upper house.

That declaration raised eyebrows, as Senator Go is a member of the legislative branch of government which is separate from the executive branch, which is where the President sits.

The 1987 Constitution defines the Philippines as a “democratic and republican state” – one of the hallmarks of republicanism is the separation of powers among the three co-equal branches of government namely the executive, the legislative, and judiciary.

The rationale for such demarcation of powers is quite commonsense: to entrust multiple powers to just one branch of government is a recipe for tyranny. Imagine if the President is also responsible for creating laws (the role of the legislative) and interpreting those laws too (the role of the judiciary) – he can force any decision he wants, whether that be giving himself more powers or extending his term limit.

As such, ensuring the separation of powers is paramount. When Go declares himself to be the President’s proxy in the Senate, that is dangerous as it means President Duterte has a direct hand in what happens in the Senate himself.

A violation of the separation of powers.

And Go’s pronouncement was not just a careless remark that he didn’t mean. Since becoming a Senator three years ago, Go has continued to be a right-hand man to President Duterte – accompanying the latter on his official trips and appointments as Chief Executive.

During a Senate committee hearing last year, veteran Senator Richard Gordon accidentally referred to Go as “Secretary Go” since the latter continued to “act as a secretary” to the President.

This fealty has been widely criticized by political observers, even those who are non-partisan. Go acted no differently to when he was the President’s personal aide. This is dangerous as it blurs the lines between the legislative and executive branches.

Although Go reiterated that his priority is as a legislator, he insisted that he would accompany President Duterte in his “own personal capacity”. It boggles the mind why a legislator would act as a personal assistant to the President on the latter’s official trips.

But most telling of all was when Go hit back at his colleagues in the Senate for questioning his closeness to the President. He defended his relationship with Duterte saying he “made a promise to the President” to never leave him because he “loves” Duterte.

From those words, it is clear that Go’s adherence to President Duterte isn’t just a matter of loyalty but rather fealty or a deep, unnatural devotion. With that, you have to wonder if Bong Go as a vice-president will simply be Rodrigo Duterte by proxy?

It is clear that Go is incapable of shifting his mindset away from being a personal aide, his ability to think and act independently is highly questionable. If that’s the case, would it truly be worth voting for a dummy candidate?