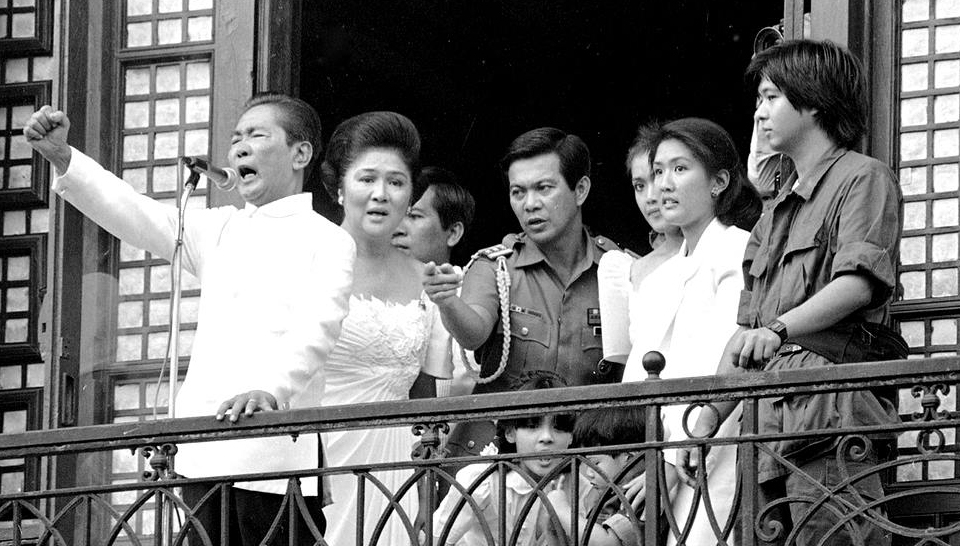 “Only in the Philippines could a leader like Ferdinand Marcos, who pillaged his country for over 20 years, still be considered for a national burial. Insignificant amounts of the loot have been recovered, yet his wife and children were allowed to return and engage in politics.”

Along with the rise of Rodrigo Duterte as President, the 2016 general elections also saw a renaissance of the Marcos political clan in the national scene. That same year coincidentally marked thirty years since the late dictator Ferdinand, along with his family, were forcefully evicted from Malacañang Palace in a bloodless popular uprising.

The 1986 People Power Revolution was renowned for peacefully ending the reign of a tyrannical government, it brought to end President Marcos’ 21-year reign of power which also included a nine year suspension of democratic processes under Martial Law. It is largely believed the Marcos family amassed astronomical amounts of ill-gotten wealth during this period, with Forbes magazine naming the former president among the most corrupt world leaders of all time.

Despite the overwhelming evidence stacked against him, the dictator was bestowed a hero’s burial in 2016 by President Duterte. The vice-presidential race which happened during that year’s general election also saw the late Marcos’ namesake, Ferdinand “Bongbong” Marcos Jr., finish a close second to Leni Robredo.

There is currently an electoral protest filed by the camp of Bongbong Marcos against the incumbent vice-president, which could potentially see him usurp the latter in the nation’s second-highest political office. His name is also regularly mentioned as one of the favourites for the 2022 presidential elections.

All these are telltale signs that the Marcos brand has lost its infamy. In the decades following their fall from grace, the powerful political dynasty was perceived as the nation’s public enemy number one – lately, as Lee Kwan Yew predicted, it seems the Filipino public have chosen to forgive entirely.

This change of heart can be largely attributed to historical revisionism widespread in social media; posts questioning Philippine history books and alternative facts of fictional Marcos “achievements” made rounds from as early as 2013, during the presidency of Noynoy Aquino. These posts, which resonated with many Filipinos who choose to forego their own research, were intended as a rebuke of Aquino’s governance but have become catapults in relaunching the political careers of the Marcoses.

While the advent of the Duterte era has also placed a spotlight on fake news and its impact on the political process, many are still complacent about rising pro-Marcos sentiments. There are many who dismiss it to be insignificant and do not deserve our attention, and the newly-converted pro-Marcos crowd justify their views by saying there is no harm in questioning conventional wisdom.

The late 19th-century philosopher W.K. Clifford would have strong objections to that contention. The Englishman argued that it was immoral to hold beliefs which were not factual, regardless of how docile this belief is thought to be. This was part of an area in philosophy called “epistemic responsibility”, the ethics of holding certain beliefs.

For Clifford, it did not matter if you thought that the false beliefs you held were harmless or trivial – the mere fact of holding beliefs with insufficient evidence supporting it was unethical. Many of us would justify that we are entitled to having our own private beliefs, but according to the late philosopher there was no such thing as private beliefs since we usually express our opinions which causes them to spread. Even if we did not talk about these beliefs with other people, they still subconsciously affect our actions just like how a person who believed vaccines were dangerous would not allow their children to be vaccinated.

From this we can see the logic in Clifford’s argument, how a false belief can have significant consequences not just in our lives but in society as well. Childhood vaccination rates have been steadily declining in the United States and much of the Western world, much of this has been blamed to the work of the anti-vaccine movement. The phenomenon has led to the return of once eradicated sicknesses such as measles and the whooping cough.

In many ways, the return of these infectious diseases can be compared to the return of pro-Marcos thinking: both spread insidiously throughout society, infecting scores of people which then causes their victims to act parasitically in the public sphere.

That comment may strike many as being facetious, but upon contemplation there is ample ground to warrant such a characterization. The spread of pro-Marcos beliefs in public have hindered the nation’s fight against one of its biggest cancers, government corruption.

The newfound popularity that the Marcos clan are enjoying have led to their return of influence in government, striking a suspiciously close relationship with the Duterte administration. Not only has the incumbent government agreed to give a hero’s burial to their patriarch, they have also flirted with the idea of abolishing the Presidential Commission on Good Governance (PCGG) – a government agency established primarily to recover the ill-gotten wealth of the Marcoses.

The agency has recovered a total of ₱170.45 billion of Marcos loot as of 2016, which is a fraction of the US$10-B which Transparency International estimates the former first family plundered from the country’s coffers in their two decades stay in power. If the family had their way entirely and the work of the PCGG would be completely halted, we are essentially absolving them of the crime of plunder.

What message would that send to present-day corrupt public officials? Essentially, it signals that they are able to go scot-free for their crimes if they manipulate the truth well enough and indoctrinate as many people as possible with alternative “facts”.

Aside from plunder, the Marcos regime was also characterized by rampant cronyism. Many of the nation’s industries were privatized to tycoons and oligarchs loyal to President Ferdinand Marcos, these include the national airline and several newspapers. If the Marcos clan return to a position of national influence once more we can expect to see these oligarchs and former cronies return to power also, stifling business competition just as they did during the 70’s and 80’s.

As demonstrated, there are plenty of reasons why supporting the Marcoses should not be tolerated. Contrary to the belief of the dynasty’s new disciples, rebuking the history books and opting for an alternative view of the Marcos era is not harmless – doing so will undo the efforts of human rights activists and the PCGG in finding justice.

Absolving the Marcoses of all their sins against the nation will also undermine efforts to stamp out corruption in public office completely, if the biggest culprits in history are allowed to go scot-free. Tolerating false narratives about the Marcos era can create detrimental impacts on Philippine society, thus when discussing about this dark age of our country’s history it is imperative to practice epistemic responsibility.