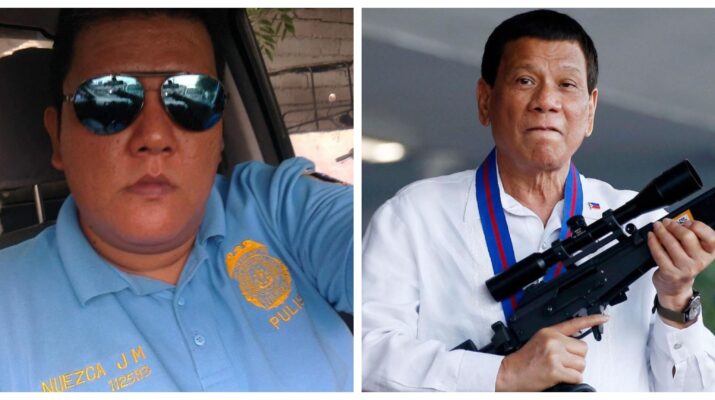 The Philippine National Police (PNP) have – at times – acted as the judge, jury, and executioner in President Rodrigo Duterte’s campaign against criminality.

But when members of the Force are complicit in crime themselves who will hold them accountable?

The video showed Senior Master Sergeant Jonel Nuezca in an altercation with a 25-year old man and the latter’s elderly mother.

In the final moments of the video, the police officer opened fire on the two victims using his service firearm – despite having his own juvenile daughter beside him.

Social media users were aghast at the hubris they witnessed. Nuezca seemed to have no hesitation in committing the unconscionable act.

The video footage showed the two victims committing no crimes, instead, it appeared to purely be a domestic dispute which made the police officer lose his cool.

Members of the PNP swore to maintain peace and order and uphold the rule of law.

For a member of the police force to be that brazen in abusing his position makes one question if the PNP have become “untouchable”.

When police officers commit criminal acts, can we truly count on the PNP to go after one of its own?

That prospect is questionable when the head-of-state himself, President Rodrigo Duterte, repeatedly tells law enforcers to ignore human rights and encourages acts of impunity himself.

Early this month, Duterte announced in a public address that he doesn’t care about human rights and urged police officers to shoot first: “Even if you don’t see a gun, just go ahead and shoot him,” the President informed members of the PNP in attendance.

That was a reiteration of previous pronouncements he made encouraging members of the police force to break the law.

In 2016, only months after being elected President, Duterte told the PNP that he will protect them after an inquiry revealed police officers were involved in extrajudicial killings.

Two years later, in another public speech, Duterte again reminded police officers not to worry about killing crime suspects as he will “take care of [them]” if they become subjects of an investigation.

How can we expect our law enforcers to adhere to the rule of law themselves when the President consistently encourages them to flout the law and to not worry about any repercussions?

Even before Nuezca’s incident, numerous examples of impunity in the police force have been recorded under the Duterte administration.

The most prominent example was perhaps the 2016 kidnapping and murder of South Korean businessman Jee Ick-Joo. Four years ago, the foreign entrepreneur was abducted from his residence by gunmen who turned out to be members of the PNP.

Jee’s wife, Choi Kyung-jin, disclosed that the kidnappers demanded a Php5 million ransom for her husband’s release. After she obliged, the perpetrators again demanded a further Php4.5 million for the businessman’s freedom.

A lengthy inquiry revealed Jee was abducted by police officers under the guise of an anti-narcotics operation. The suspects held him for ransom and eventually strangled the Korean national to death, inside Camp Crame no less – the headquarters of the PNP.

Not only was the public shocked that their own police force was behind the gruesome murder, the audacity of the crime – id est using the PNP’s own headquarters to commit the act – was also beyond belief.

For rogue cops to be that audacious in their crimes implies that the culture of impunity within the PNP has reached new heights. It is not difficult to see why: the President himself enables that kind of behaviour.

Trivializing human rights and permitting cops to ignore the rule of law are parts of the problem, but Duterte himself boasts about committing heinous crimes himself.

In 2016, he unapologetically admitted that he killed three men during his time as the mayor of Davao City. The following year, he said he “stabbed someone to death” as a teenager during an address in front of foreign dignitaries in Vietnam.

When the President himself does it, why would erring cops be deterred from senseless killings themselves?

Thus, it shouldn’t surprise anyone that Senior Staff Sgt. Nuezca could commit those brazen acts nonchalantly, even if it was in front of his own young daughter.

The culture of impunity runs strongly within the Philippine National Police, and the Duterte administration has shown it is willing to tolerate it.