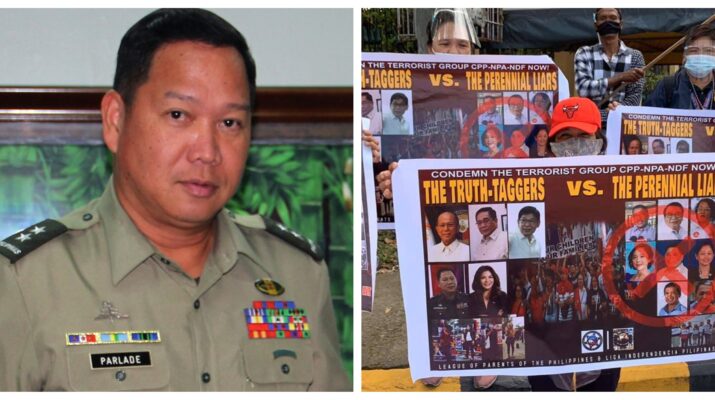 Red-tagging has been a constant feature of the Duterte administration. Student activists, environmentalists, lawyers, trade unionists, and even elected members of Congress have been subjected to this practice.

The Supreme Court defines red-tagging as “the act of labelling, branding, naming and accusing individuals and/or organizations of being left-leaning, subversives, communists or terrorists (used as) a strategy…by State agents, particularly law enforcement agencies and the military, against those perceived to be ‘threats’ or ‘enemies of the State’“.

Throughout the Duterte era, activists have been branded either as sympathizers of the communist guerrilla group, the New People’s Army, or are combatants themselves.

It is a dangerous practice that often has very severe consequences. Many activists who were red-tagged have either been arrested or were assassinated.

The Armed Forces of the Philippines (AFP) and Philippine National Police (PNP) have both taken lead roles accusing activist organisations, and even those sympathetic to these activist groups, of being part of the communist insurgency.

Even prominent celebrities were not spared: last month, actress Liza Soberano and beauty queen Catriona Gray were both given warnings by a military general for lending their support to women’s rights organisation, Gabriela.

Lt. Gen. Antonio Parlade made a grave warning to both showbiz personalities, saying if they continue their support of the women’s rights group they might follow the same fate as slain activists.

Parlade was widely ridiculed for his baseless allegations, how could well-known personalities be part of a guerrilla war? He was also criticized by politicians and even President Duterte himself, who said military officials should “keep quiet” instead of red-tagging.

This month, the Senate opened a probe on the issue of red-tagging by state forces on activists and elected officials. The Committee on National Defense and Security, chaired by Sen. Panfilo Lacson, convened the inquiry and invited both red-tagged activists and state officials.

On one side were military and civilian state officials who belong to the National Task Force to End the Local Communist Armed Conflict (NTF-ELCAC). This is an inter-agency body which has been spearheading the red-tagging of activists and even elected members of Congress; it is chaired by President Rodrigo Duterte himself with Gen. Parlade serving as its spokesperson.

In the Task Force’s crosshairs are members of the Makabayan Bloc, a coalition of progressive parties in the House of Representatives. Parlade and the rest of NTF-ELCAC have consistently maintained that these parties are mere “fronts” for the Communist Party of the Philippines.

She cited examples of countless activists who were red-tagged due to their opposition to the Duterte regime. They subsequently disappeared, been killed, illegally arrested or slapped with trumped-up charges.

Several activists have already fallen to assassins this year alone. Last August, human rights activist Zara Alvarez was gunned down while walking back to her boarding house.

A week earlier, another activist – Randy Echanis of the Anakpawis Party-list (part of the Makabayan Bloc) – was found dead with stab wounds inside his own home.

Both were prominent activists and critics of the Duterte regime, they were also both red-tagged: accused of aiding the communist underground to wage war against the government.

It should come as no surprise then that out of the entire House of Representatives, it is only the representatives from Makabayan who are red-tagged, as they have consistently been a thorn in the side of the Regime.

In fact, while the Senate inquiry was ongoing social media channels of the Philippine National Police (PNP) were sharing posts red-tagging the Makabayan lawmakers in attendance.

This was by no means an isolated incident: throughout the year Facebook pages belonging to the PNP constantly tagged the Makabayan Bloc parties of supporting or even assisting the communist underground.

Former PNP chief Arthur Gamboa insisted that the online behaviour was not sanctioned by the PNP, and even warned the various police stations against the practice. However, the red-tagging of activists and the Makabayan Bloc continued.

These representatives are also public figures; their lives are closely scrutinised by journalists and members of the public. If they were truly engaged in combat against the government, evidence would have surfaced in the public sphere by now.

And the issue of evidence is what truly makes Parlade’s and the NTF-ELCAC’s accusations against the Makabayan Bloc that less credible: if they indeed have solid evidence to link the progressive lawmakers to the communist underground, why have they not filed charges against them yet?

The Duterte regime secured the passage of the draconian Anti-Terrorism Law, which essentially makes it easier for law enforcement officials to arrest “suspected terrorists”.

Despite this legislation, the Regime is still unable to pin down the Makabayan Bloc for terrorism charges – despite reiterating how sure they are of the latter’s involvement in the guerrilla movement.

This begs the question: does the NTF-ELCAC or even the Duterte regime really have evidence linking the Makabayan Bloc to rebellion or terrorism?

From anyone’s perspective, the charges made against the Makabayan lawmakers are as dubious as the accusations hurled towards the showbiz personalities regarding their involvement in the communist underground.

It is glaringly obvious the Duterte regime is recklessly red-tagging individuals to intimidate and silence them from criticizing their administration. Such practice bastardizes our democracy and makes a mockery of the rule of law.

Activism is a guaranteed right under the Constitution and efforts by the Regime to stifle that is the true motivation for the rise of red-tagging.