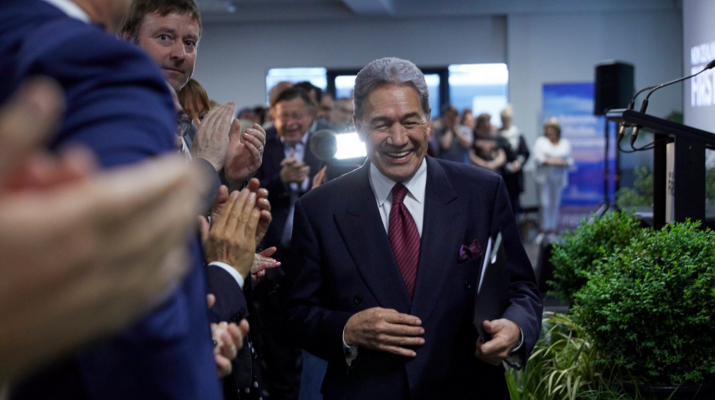 If you needed further proof of Winston Peters’ talent as a politician, consider this: it’s been a week since his public speech and the mainstream media is still talking about him.

Politics is the embodiment of that old adage: “It doesn’t matter what people are saying about you, as long as they’re talking about you.”

It wouldn’t be surprising if that was Peters’ mantra to guide his storied political career. Since winning a tight race for the seat of Hunua in 1978 (in which the result was contested all the way to the High Court), the veteran has always sought to be in the public eye – to great success.

When Peters avoided the media and lived a generally private life in the eight months since his Party’s crushing defeat in the 2020 general elections, New Zealand politics did not feel the same.

So when New Zealand First held its first party conference (or ‘convention’) in Auckland last weekend, with their acclaimed leader due to make a public speech, the media had to be there.

Like a desert traveller having their first sip of water after a long time, the media consumed Winston’s every word during his much-awaited Sunday afternoon address.

And true to his ways, Peters did not shy from being controversial – taking aim at the heightening “woke culture” prevalent in New Zealand politics. The archetypal maverick politician, he spared no one; lashing out at Labour, National, the Māori Party, ACT, and even Peter Dunne.

Much of what the NZ First leader said has already been reported in mainstream media. Again, a testament to Peters’ enduring skill at gaining publicity and the media’s depravity of reporting about him once more.

But because of that fixation on Winston’s “return”, the media failed to properly report what was truly noteworthy about NZ First’s first convention since the election – that they’ve managed to keep their movement intact.

Because alongside the likes of Peters, Shane Jones, Mark Patterson, Fletcher Tabuteau, and Darroch Ball were 150 or so every day New Zealanders who made time and spent money to be at the Waipuna Conference Centre in Auckland.

Those are ordinary Kiwis who have day jobs and look after family, voluntarily sacrificing their weekend and spend money to support a party that isn’t even in Parliament anymore. You would be hard-pressed to find a more tangible show of dedication elsewhere in NZ politics.

Regardless of how popular Jacinda Ardern is or John Key was in his heyday, their respective campaigns would not have flourished without the backing of their party machinery – the throngs of Labour or National volunteers who threw their efforts to the cause.

When Chlöe Swarbrick surprisingly took the seat of Auckland Central in last year’s elections, that was widely credited to the fact that she could mobilise around 700 volunteers to door-knock, drop flyers, or run phone banks to fuel her campaign.

Often forgotten in the discourse of political campaigning is the significance of volunteers and party members. Understanding how to attract and then motivate these volunteers is more crucial to a political movement than learning abstract political theory.

If NZ First were to return to Parliament in the 2023 election, it wouldn’t entirely be due to the unwavering shrewdness of their famed leader; more so, it would be because of the grit, determination, and belief of the hundreds (and maybe thousands) of party members who continue to believe in its kaupapa.

Therein lies the challenge for this party, which is celebrating its 28th anniversary this year, if they wish to return to the halls of power in two years’ time: retain and grow your movement. Form committees around the country, raise funds, and mobilize members to get your message out.

In discussing NZ First’s future, Winston Peters’ health and vigour are unavoidably mentioned. But I’d argue that as long as the Party membership retains its vitality and its funds are at a healthy level, the Party has a fighting chance of making it back in 2023.

And seeing their vibrant and lively Convention last weekend indicates that the Party has what they need to begin mounting that comeback.

One thought on “New Zealand First has a fighting chance, not because of Winston, but because they’ve kept their movement in tact”