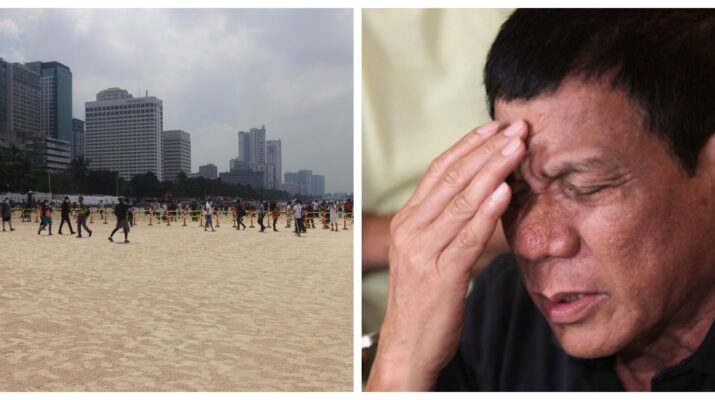 The white elephant is historically used as a symbol for wasteful or frivolous spending that has no useful purpose. In the Philippines, the animal may have been supplanted by a white sand beach instead.

Rehabilitating Manila Bay, especially its shores, has been a headache for successive governments.

Loose regulations around wastewater being dumped into the bay and the intensified human settlements around its shoreline has transformed the once picturesque tourist attraction into a literal cesspool.

The Duterte administration has arguably been the most serious in cleaning up the once renowned Manila landmark. However, their grand plan to transform Manila Bay has instead exposed the incompetency and ineptitude rampant in their government.

Environment Secretary Roy Cimatu bared plans to create an artificial “white sand” beach in the Bay as part of the Manila Bay Rehabilitation Program he launched in 2019.

The makeover was allocated Php389 million in the 2020 national budget, a significant sum that was criticized for being unnecessary – particularly during a global pandemic and when the Philippine economy is officially in a recession.

Although spending public funds to improve the environment is a reasonable investment, the Manila Bay project was counter-productive as it created many environmental problems instead.

The project involved dumping tonnes of “white sand” on a 500-meter strip along the Bay’s shoreline, many environmental groups raised concerns about the ecological implications of this action.

Quartz and feldspar are the materials commonly utilised in such projects, while dolomite sand is used mainly for building infrastructure. How this material interacts with the natural ecosystem of Manila Bay is unclear, but a resident reported sighting hundreds of dead fish floating in the area.

It would be concerning if the dolomite sand is causing fishkill in the area since many of the Bay’s residents rely on fishing for their livelihood. But instead of conducting research into the matter, the Duterte administration claimed their critics had directly sabotaged the Bay to create the appearance of a fishkill.

The dolomite sand was taken from a quarry site in Cebu province and was transported to the capital for the project. It was previously reported that dolomite mining in Cebu was causing the destruction of coral reefs and the dwindling of marine life in the island province.

By patronising dolomite in the “white sand” beach project, the government are indirectly contributing to the province’s crumbling marine health. Planting mangroves along the Bay’s coast, as suggested by the University of the Philippines, would not only have been cheaper but also more ecological.

Government officials rejected criticisms of the project’s costs and stated that out of its Php389 million budget, only Php28 million has been spent so far.

This is a good opportunity for the Duterte government to cut their losses and rechannel the leftover funds elsewhere, such as humanitarian assistance for victims of Super Typhoon Rolly.

But the administration is showing no signs of backing off from their vanity project.

Environment Under-Secretary Benny Antiporda disclosed that more dolomite sand is needed to complete the Manila Bay beach project. Though, he was unable to give an answer when asked where the added dolomite sand will be sourced from.

Maintaining the Manila Bay beach is proving expensive too, as the dolomite sand tends to be washed away by strong waves. A geologist stated that given its current state, the artificial beach may be washed out by 2021 without any added enhancements.

The Department of Public Works and Highways (DPWH) has resolved to build a breakwater to protect the dolomite sand from being washed away. This creates an added cost to the project which further demonstrates the lack of foresight that went into it.

For generations, the taxpayer could be looking at footing the bill to maintain the Manila Bay beach – an undertaking they never asked for.

It was sold to the public as a means to rehabilitate Manila Bay and improve its natural environment, but with fishkill being reported and the dolomite sand being used contributing to the destruction of coral reefs – the project is anything but environmental.

With its extravagant costs and superfluous rationale, the dolomite beach initiative is a quintessential example of a white elephant project.

When the country still faces local COVID-19 outbreaks, its economy in a recession, and having been recently hit by a string of powerful typhoons, you’d think the government would be wiser with how it spends public funds.

Instead, the Duterte administration is paying a premium for a vanity project no one asked for.