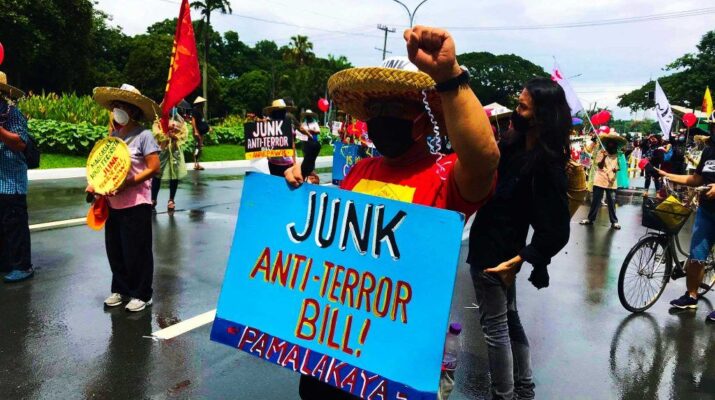 “Attack of the Clones” isn’t just the title of the 2002 release of the Star Wars franchise, it has also become the reality for many activists under the Duterte administration.

With anxieties high from the imminent passing of the draconian Anti-Terrorism Bill, many anti-government activists have mysteriously found clone accounts of themselves on Facebook.

It is unclear how these accounts were duplicated, with the National Bureau of Investigation (NBI) alleging that a Facebook glitch may be to blame. But with activists being hit with death threats and abuse through these fake accounts, the real reason may be more sinister.

Students from the Polytechnic University of the Philippines (PUP) received threats from their own clone accounts, these messages contained references of anti-government statements they made online.

Vocal anti-government activists from other universities such as De La Salle University (DLSU), University of Santo Tomas (UST) and the University of the Philippines (UP) also reported similar threats made by Facebook accounts mimicking their own.

Another student-activist from the Cordillera Region, Diego Lee, found a clone account of his that labels him as a combatant with the revolutionary group, New People’s Army (NPA).

Many victims of extrajudicial killings in the country were also accused (without evidence) of being sympathizers of the NPA, a ploy called “red-tagging”. Hence, insinuating that someone is a member or a sympathizer of the revolutionary group puts their lives at serious risk.

The proliferation of clone accounts and their subsequent targeting of activists began as online outrage against the proposed Anti-Terrorism Bill grew. Under the new legislation, a body of Cabinet officials can order the arrest of people “suspected” to be partaking in terrorist activities – essentially blurring the line between the executive and judiciary, while foregoing the basic legal principle of presuming one to be innocent until proven guilty.

Online activities are within the scope of the Anti-Terrorism Bill also, which raises suspicions about the timing of the fake accounts. All of a sudden, anti-government activists find fraudulent accounts mimicking them while claiming to be rebel sympathizers or are sending death threats.

They suddenly find themselves culpable of violating the new bill, which only requires President Duterte’s signature to become law. Given that the victims of these fraudulent accounts are dissidents of the government, we can plausibly connect this phenomenon to the State finding ways to (wrongfully) prosecute their detractors.

That theory is not unfounded under the present regime, even during the early days of the Philippines’ COVID-19 outbreak – when the national government should have devoted their entire effort into controlling the pandemic – authorities were busy cracking down on dissenters online.

A Facebook user who complained about wasteful government spending was summoned by the NBI over his post. The unnamed social media user criticized the lack of funding for healthcare by the Duterte government and fell into legal trouble for it.

Another person in Agusan del Norte province was arrested by police after insinuating that President Duterte and his right-hand man, Senator Bong Go, were both “crazy” in a social media post. The authorities apprehended the man on the charge of “cyberlibel”, they also confiscated the man’s phone that was used to post the alleged “criminal” post.

Police also arrested without warrant a 55-year old teacher, simply for informing her fellow residents that badly-needed relief goods were being hoarded by their local government officials. The woman, Juliet Espinosa, was arrested for making a “seditious” post on Facebook criticizing the government’s inept response in helping her community.

Those incidents would merit no criticism, much more police arrest, in a truly democratic country. Unfortunately, the Philippines under the Duterte regime has become anything but democratic.

If minor examples of dissent can be penalised even before the Anti-Terrorism Bill is passed into law, the advent of these fake Facebook accounts is even more terrifying. Think of how easily someone can recreate your online profile, post a critical message or photo against the Duterte government, and under the new law you could very well be the target of an arrest.

Thus, it is clear why many citizens are alarmed over the sprouting of clone accounts just when the Anti-Terrorism Bill’s passage into law is imminent. This could very well be the discreet first move to crackdown on online activists’ dissent.