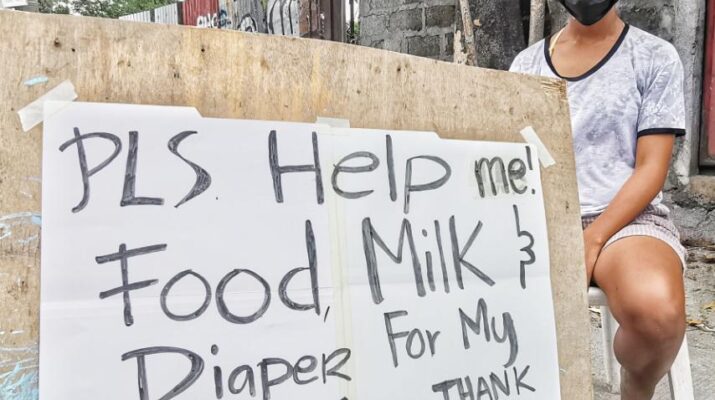 Placing entire communities under lockdown have been the go-to response for many countries to the COVID-19 pandemic. This measure is effective in curtailing the spread of the virus, but adversely impacts the economy as thousands of people are unable to work and majority of businesses are forced to cease operations.

Other countries have cushioned the financial blow on their citizens by introducing a range of economic support measures. This emphasizes the fact that the viral outbreak is not just a health emergency, but an economic one also.

After all, people still need to earn an income for their sustenance. They have to put food on the table, pay the rent or their mortgage, utility bills, or their children’s school fees.

In the Philippines, the administration of President Rodrigo Duterte have been largely apathetic to the plight of poor Filipinos. Shortly after community transmission of the virus began, his government placed large parts of the country under an enhanced community quarantine (ECQ) – their version of the lockdown seen elsewhere in the world.

Many workers were forced to either work from home, or miss work completely. The latter is particularly true in the case of the millions of Filipinos who belong to the “informal economy” – these are the sidewalk vendors, fruit stall sellers, pedicab (rickshaw) drivers, and the like.

Thus, these informal workers are the hardest hit during the COVID-19 crisis. For their part, the Duterte administration introduced the Social Amelioration Program (SAP) payments which gives a lump sum amount to impoverished households to help them get by during the ECQ.

However, its distribution has been sluggish and has been marred by widespread corruption.

One example is the case of 69-year old taxi driver, Jimmy Tindugan. Despite his old age, he lined up to receive the SAP payment starting at 5 A.M., only to be told hours later he didn’t qualify for it and went home empty-handed.

In another incident, 53-year old carpenter Teodoro Omandam suffered a heart attack and died while lining up to receive the SAP payment. His widow, Estrella, said that her husband lined-up for the financial assistance for three straight days due to the delays in the disbursing the payment – this level of stress undoubtedly took its toll on Teodoro’s health.

A 94-year old woman who lined up for the SAP in Caloocan City could have easily experienced the same fate. Magna Aparece said she had no choice but to wait in line herself as she had no surviving relatives left, but despite her efforts she went home empty-handed as she failed to fill out the necessary forms.

It is pitiful that these destitute beneficiaries are made to undergo such painstaking procedures just to receive the bare minimum they need for their sustenance.

Many of those eligible could be persons-with-disabilities or are elderly, as the examples mentioned show. Forcing them to line up for long hours under the scorching sun will make them vulnerable to heart attacks or strokes.

If the purpose of the SAP is truly to ameliorate the plight of poor residents amidst the COVID-19 crisis, surely there is a simpler way to allocate the funds to those who need them?

It was reported that over 2 million eligible families failed to claim the cash aid before the deadline, which highlights just how rigorous the process is. The most vulnerable should not be drowned in bureaucracy just to be able to live.

Many impoverished residents have also found difficulty in accessing the SAP and in one instance an individual even experienced violence because of his attempts. A man in Caloocan City was reportedly beaten up by local government employees for simply inquiring about the said financial aid, a further testament to the ludicrous and inhumane character of the Duterte administration’s main economic support scheme.

Modes of public transport such as buses, jeepneys, and the MRT/LRT system all ceased under the ECQ, which hit the poor the hardest as they are the ones who utilize these public goods.

In Metro Manila, a man was seen pushing his ailing wife – a kidney dialysis patient – on a wheelchair for six kilometers just to seek treatment at a hospital. This was necessary as no public transport was available due to the ECQ being implemented, despite the essential reasons for the couple’s trip.

A similar example happened in nearby Makati City, where a father was forced to carry his infant son’s deceased body for 5 kilometers due to the lack of public transportation. The 32-day baby succumbed to pneumonia in the hospital, and the father had to transport his remains inside a cardboard box back to their home.

Clearly there was no plan in place to service the essential needs of ordinary citizens in the event of imposing the ECQ. But it was not only the commuters who were affected by the recklessness of the government’s new rules, the public transport providers also suffered themselves.

The family of a jeepney driver were forced to live inside their patriarch’s service vehicle. Once jeepneys were forced to stop plying their routes, they lost their source of income and were unable to pay rent. As a result, they were made homeless and had to live in the only possession they had left.

Other jeepney drivers experienced the same fate. In the busy Rizal Avenue highway in Manila, a group of drivers were seen begging for alms from passing motorists.

According to the news report, they are from the provinces and could not return to their homes as the ECQ banned inter-regional travel. They were left with no choice but to stay in the capital city and become beggars in order to survive.

Further proof of the Duterte government’s ineptitude to assist impoverished Filipinos has been exposed in many reports of families going hungry, not receiving proper medical treatment, or becoming homeless amidst the COVID-19 crisis.

Construction workers based at the University of the Philippines campus went hungry and were forced to eat rats and feral cats just to survive. These labourers received no help from either their employers nor the government. Their dilemma is similar to the displaced jeepney drivers, they hail from provincial towns and cities and had no way of going back home.

A teenage mother by the name of Abigail was also spotted by CNN Philippines begging for milk, food, or diapers for her infant. She held up a sign (seen in the photo above) begging passing motorists along the busy Commonwealth Avenue in Manila for any assistance.

The level of suffering these impoverished families experience makes it clear the Duterte administration’s support mechanism during the COVID-19 crisis is not working. Adding salt to the wound, there have been officials within the government who have blamed the poor for the worsening outbreak in the Philippines.

Upon assuming office, President Duterte proclaimed himself to be a man of the poor. His support base often comes from the middle-class and low-income families in the regions. Despite this support, those same demographics are the ones missing out in his government’s COVID-19 support measure.

One of two things need to happen: either the administration look after the people who have entrusted them to look after their best interests, or the poor start to hold the Duterte government accountable for their plight.

One thought on “Philippines: the poor are being left out by the Duterte government’s COVID-19 response”