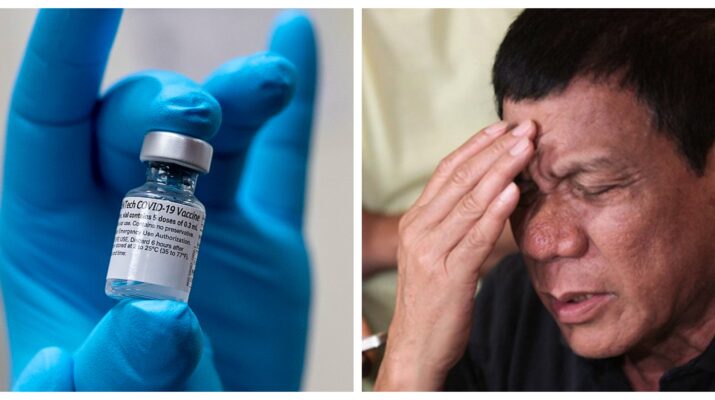 In its campaign against COVID-19, the Duterte administration adopted the slogan, “We Heal as One”, emphasizing the need for national unity amidst the global pandemic.

The government reiterated that all Filipinos were in the fight together and that when a vaccine for the virus becomes available there would be no favouritism towards gaining access.

In fact, no less than the Presidential Spokesperson Harry Roque himself announced earlier this month that there would be 24 million Filipinos who are first in line to receive the vaccine.

That list was made up of medical front liners, indigent families, senior citizens, and those with precarious health conditions that make them more susceptible to the respiratory virus.

In short, the people who will receive the vaccine first are those who are most in need of immunisation.

But last weekend, President Rodrigo Duterte himself revealed that soldiers assigned to his detail as well as members of his Cabinet had already been inoculated with the Chinese-made Sinopharm vaccine.

In a meeting with Director-General Eric Domingo of the Food and Drug Administration (FDA), the President said many soldiers had already been vaccinated against COVID-19.

This was news to the Director-General, whose agency is yet to authorise any vaccine for distribution and use in the Philippines. Any use of COVID-19 vaccines which has not received approval from the FDA is illegal.

Confusion would later arise in news circles, as both the Armed Forces of the Philippines (AFP) and the Presidential Palace denied authorising the use of these unregistered vaccines – despite the earlier admission of the President himself.

Duterte’s claims were validated by the chief of the Philippine Army (PA) Lt. Gen. Cirilito Sobejana, who disclosed during a radio interview that the vaccines given to his troops came from “the chain-of-command” of the Philippine military – spearheaded by the commander-in-chief, President Duterte, himself.

But this would be contradicted by Maj. Gen. Edgard Arevalo, the AFP spokesperson, who said the military “has not sanctioned any vaccination of its personnel against COVID-19“.

If that was true, then President Duterte jumped the gun and ordered the inoculation of soldiers without informing the AFP hierarchy itself.

But even the Presidential Palace itself denied giving the order to vaccinate AFP personnel. Spokesperson Harry Roque said the authorisation did not come from President Duterte and most likely came from the military leadership.

At that point, the issue became too confusing for the layman to continue to follow.

First of all, the Duterte administration promised that the most in need – namely the frontline health workers, senior citizens, those with underlying health conditions, and the poor – would be the first to receive the vaccine. Was this a lie?

Second, why did the spokespeople for both the Office of the President and the Philippine military not know about the inoculation of selected soldiers and members of the Cabinet? Did they really not know or were they trying to hide this fact from the general public?

But the biggest issue of all is that, contrary to the Duterte administration’s claim that it would be the most vulnerable who will receive the vaccine first, it is actually those who belong to the ruling class or who serve these elites instead.

Choosing to vaccinate soldiers assigned to protect President Duterte and members of his Cabinet first denotes that the government’s priority is to protect the Chief Executive first. This contrasts with the sworn duty of the government, which is to serve and protect the people.

The Duterte administration’s earlier pronouncement to vaccinate a list of 24 million Filipinos first, comprising of those most at risk to COVID-19, was admirable. But this decision to administer the vaccine to members of the ruling class instead reeks of self-interest.

It was previously reported that our Health Secretary Francisco Duque had “dropped the ball” in securing a supply of COVID-19 vaccines from Pfizer-BioNTech, imperilling the future of the country as it still did not have a guaranteed source of vaccines when the rest of the world had been announcing their success in procuring millions of doses for their own respective populations.

Now it’s revealed that there is a minuscule amount of vaccines already available in the Philippines, just not to the ordinary citizens. Because under the Duterte administration, there is one rule for the elites and another for everyone else.

One thought on “The “VIP vaccinations” scandal prove there is one rule for the ruling class, another for everyone else”