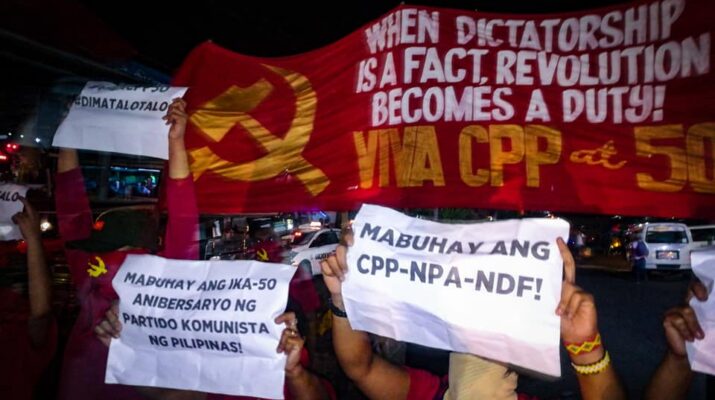 December 26 marks the founding anniversary of the Communist Party of the Philippines (CPP), an underground revolutionary organisation that has now existed for 52 years.

Together with its armed wing, the New People’s Army (NPA), the CPP has driven a revolutionary movement in the Philippines that has spanned 7 presidents – from opposing Marcos’ martial law rule to fighting the present Duterte regime.

It is under the incumbent administration that the CPP has come under intense scrutiny. President Rodrigo Duterte, despite declaring himself to be the country’s “first leftist president” and was considered a friend of the CPP for many years, has made the eradication of the group his number one defence priority.

The Duterte administration has been going after known members of the CPP, including peace consultants who participate in peace talks with the Philippine government.

Arresting peace talk negotiators is illegal under the Joint Agreement on Safety and Immunity Guarantees (JASIG) that the Philippine government signed with the CPP in 1995.

This legally binding document guarantees safety and immunity from arrest to all peace negotiators so they may be able to travel the country to consult their constituents without the fear of arrest or intimidation.

Respecting the agreement is crucial in forging a lasting peace between the Philippine government and the CPP. With the Duterte government reneging on the terms of the JASIG, it is also impeding the possibility of peace in the country.

Throughout 2020, the issue of “red-tagging” became prominent in our national discourse.  Several human rights activists, student activists, and even lawyers and physicians were killed or arrested after being accused of supporting the communist movement.

The Duterte administration’s propaganda machine has also been effective in defusing public outcry for these killings. Many find these extrajudicial killings and warrantless arrests acceptable so long as the victims were alleged “communists”.

Not only are state-sanctioned assassinations illegal, but people also need to understand that it is unconstitutional to prosecute anyone for adhering to communist views. Section 18 of the Bill of Rights states: “No person shall be detained solely by reason of his political beliefs and aspirations“.

In his speech announcing the repeal of the law, President Ramos declared in 1992: “We repeal [the Anti-Subversion Law] confident of our national stability and confirmed in the resilience of our democracy.”

Scrapping the draconian legislation is truly an affirmation of the Philippines as a democracy. The notion that you can be considered an enemy of the state for holding a set of views – no matter how taboo to society – is antithetical to a democratic state.

But although the Anti-Subversion Law is long gone, left-leaning organisations and political parties have been constantly harassed and accused of being supporters of the CPP or even the NPA.

President Duterte himself is fond of calling the Makabayan Bloc – a coalition of progressive party-list groups – as “legal fronts” of the CPP. He added that the red-tagging of these groups is justified, and his security advisers are studying how they can disqualify its affiliated party-list groups from running for public office.

So great is the Duterte administration’s hatred for the Makabayan Bloc that they would consider denying them of their constitutional right to seek public office because of their alleged ties to communist groups.

The group of seven lawmakers frequently deny Duterte’s allegations, insisting they have no formal ties with the CPP. But even if they were members of the organisation, they would still not be liable to prosecution.

There is no law that criminalises holding communist views or even membership to the Communist Party of the Philippines. President Duterte’s threats against the Makabayan Bloc are not only baseless but also empty.

No less than Duterte’s own Justice Secretary Menardo Guevarra opposed the reintroduction of the Anti-Subversion Law or any attempt to criminalise membership to the CPP.

“Being leftist is far from being terrorist. As long as activism remains in the realm of ideology, there is nothing to be alarmed about,” Guevarra said in 2019.

Another legal mind, former lawyer and now Senator Franklin Drilon also opposes the revival of the legislation saying it was “prone to abuse and [used as] a tool to harass” but also “undermined some of our basic constitutional rights“.

Indeed, even without the Anti-Subversion Law the Duterte administration has been hounding activist groups and party-lists for allegedly having ties to the CPP, despite there being no law criminalising this.

Thus, any attack by the Duterte administration – in the form of arrests of extrajudicial killings – on any activist group or individual for being members of or having affiliations to the CPP is unconstitutional and baseless.

President Duterte and his administration need to be reminded that membership to the CPP or holding communist views are not illegal in the Philippines.